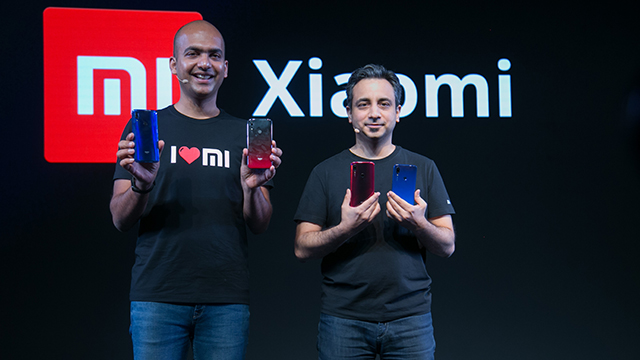 Xiaomi, India’s number one smartphone brand, announced the 32MP selfie camera-equipped Redmi Y3 alongside Redmi 7, which brings the Kryo architecture to the Redmi series for the first time ever.

Speaking on the occasion, Anuj Sharma, Chief Marketing Officer, Xiaomi India, said, “We’re excited to offer our all-new Redmi Y3 which redefines the selfie experience for our Mi Fans with its 32MP super selfie camera. Embodying the stunning Aura Prism design, Redmi Y3 is a significant jump from previous iterations. In addition, we also launched the ultimate all-rounder, Redmi 7. Powered by the Qualcomm Snapdragon 632, Redmi 7 embodies the beautiful Aura Smoke design combining several great features including a dual rear camera, making it a well-rounded device across departments. Both phones also come with a high-capacity 4000 mAh battery, offering the best of innovative technology to consumers across India at a truly honest price.”

Introduced with the Redmi Note 7 series, Aura Design takes new shape to form Redmi Y3 and Redmi 7. While Redmi Y3 features micro lines on the rear with a prism-like effect, Redmi 7’s smoke-inspired colours are sure to shake the market. Both phones feature Corning Gorilla Glass 5 on the front, with reinforced corners and P2i nano-coating to give the devices a degree of resistance against splashes.

With the Redmi Y1 and Y2 series already having garnered over 7 million users, Redmi Y3 makes for a great upgrade for the selfie focused users

Marking a significant upgrade from the legacy created by previous Redmi Y series phones, Redmi Y3 features a 32MP selfie camera that is sweetly positioned as an enabler for today’s content creators. From sharp, high-resolution selfies to full-HD videos with EIS, the 32MP camera is a master of several tricks.

With a Super Pixel size of 1.6μm, Redmi Y3’s selfies and videos capture light effectively to recreate images that are true to life. Low-light selfies are taken care of by an intuitive screen flash, which can either be set to automatic or force enabled.

Redmi Y3 32MP selfie camera comes with a Palm Shutter mode, which allows the user to trigger the 3-second timer with a simple palm gesture.

Innovation comes in all forms, and one of the most recent developments in the Redmi lineup has been Aura Design. Redmi Y3 embodies Aura Design, but with a prism-like effect exhibited on the rear of the phone. With intricate micro lines running across the structure, Redmi Y3 brings something that has never been seen before to the segment.

For the first time ever, custom Qualcomm Kryo cores now feature in the Redmi Y series with SnapdragonTM 632 mobile platform. The Snapdragon 632 mobile platform contains eight Kryo 250 cores in two clusters of four cores each, optimally segmented to handle hardware-intensive tasks in the most efficient manner. With the capable Adreno™ 506 GPU, Redmi Y3 is well-equipped to handle most modern games and visuals.

Redmi 7 — The Ultimate All-rounder
Marking a colossal shift in design language and overall processing capability, Redmi 7 is the all-round phone for everyone. Redmi 7 marks the debut of Qualcomm’s 600-series on a Redmi smartphone, with the Kryo 250-powered Snapdragon 632, which efficiently delivers smooth performance for all tasks. Featuring the same Adreno 506 GPU as Redmi Y3, Redmi 7 will comfortably handle graphically intensive tasks.

Redmi 7 is Redmi reimagined — an overall upgrade from previous iterations across all fronts. Featuring a 6.26” (15.9cm) HD+ Dot Notch Display covered with Corning Gorilla Glass 5, Redmi 7’s ergonomics were imagined to provide a great hand feel. Aura Smoke Design brings more to the mix with a pleasing pattern on the rear, resulting in a gradient design that’s sure to catch everyone’s fancy.

Another significant upgrade for Redmi 7 are its rear cameras — the dual camera setup of 12MP + 2MP brings it a lot closer to the Redmi Note of its generation. With AI scene detection (30+ scenes) and PDAF support, Redmi 7’s cameras are equipped to handle photography efficiently across a wide range of light conditions.

Topping all of this off is a high-capacity 4000mAh two-day battery, that delivers the battery efficiency Redmi phones have come to be known for across various user groups.