Leading smartphone company Xiaomi announced today that it will now manufacture its devices locally in India, in a show of commitment to Honourable Prime Minister Shri Narendra Modi’s ‘Make in India’ initiative.
Xiaomi revealed its ‘Make in India’ plans at a special event today in Visakhapatnam, located in the state of Andhra Pradesh, in the presence of Honourable Chief Minister Shri Nara Chandrababu Naidu and Mr. Amitabh Kant, Secretary, Department of Industrial Policy and Promotion (DIPP).

Xiaomi entered India just before then, in July 2014. Its unique and innovative direct-to-consumer business model has been instrumental in disrupting the Indian smartphone industry. By manufacturing its smartphones in India, Xiaomi is extending its long-term commitment to the Indian market. Investments like these set an example for more international players to join the ‘Make in India’ programme and will play a key role in transforming India into a global manufacturing hub. 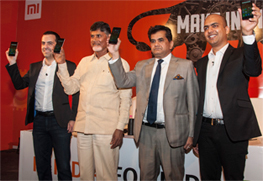 Xiaomi has partnered with Foxconn Technology Group to manufacture its smartphones in India. The factory is based in Sri City, Andhra Pradesh. The choice of location is strategic as Andhra Pradesh is known to have highly skilled technical manpower, an enterprising population and a dynamic emerging leadership – a combination of factors that make the state appealing to high-growth technological companies such as Xiaomi.

The first Mi phone to be manufactured in India is Redmi 2 Prime, an enhanced version of Redmi 2 with 2GB RAM and 16GB Flash, which will be available for Rs. 6,999 on Mi.com and other partner sites (Flipkart, Amazon, and Snapdeal) starting August 10. Redmi 2 Prime features a Qualcomm Snapdragon 410 64-bit processor, 4G Dual SIM support, and a 4.7″ HD display. With the memory upgrade, Redmi 2 Prime offers an even smoother user experience and more space for apps and media.

Foxconn has already started producing Redmi 2 Prime at their Sri City factory, and 100% of the Redmi 2 Prime units sold in India are made in India.

Hugo Barra, Vice President, Xiaomi Global said: “Manufacturing smartphones locally is a significant step towards incorporating Xiaomi into the fabric of India in the years to come. Thanks to Prime Minister Shri Narendra Modi’s visionary plan to transform India into an attractive destination for manufacturing, we have a great opportunity to make our products in India, bringing us even closer to Indian consumers and contributing to India’s evolution in the technology sector. After taking into consideration several factors, manufacturing in Andhra Pradesh was an obvious choice for us. This has been possible due to the support of Chief Minister Shri Nara Chandrababu Naidu and his forward thinking policies, as well as Mr. Ashok K Kantha, the Ambassador of India to China, who played a key role in helping us to forge links with Andhra Pradesh.”

Manu Jain, Head of India Operations, Xiaomi, said: “We started looking at options for local manufacturing as soon as Xiaomi entered India in July last year. Being a key driver of ‘Make in India’, DIPP Secretary Mr. Amitabh Kant has been a strong supporter of Xiaomi right from the start, and has played an important role in turning our local manufacturing plans into reality. Local manufacturing shows Xiaomi’s commitment to being in India for the long haul, and we are also able to contribute to generating more jobs in India. We are truly excited to be playing a role in enhancing the quality of life of the people of India.”

Honourable Chief Minister of Andhra Pradesh, Shri Nara Chandrababu Naidu said: “We have great faith in young leaders and young companies like Xiaomi. These new generation companies and entrepreneurs will be key to the success of Andhra Pradesh and India. We are happy to partner with Xiaomi as they set up their first manufacturing unit in India, as part of the Make in India program. We believe this partnership will provide new opportunities to youth of the state and develop an electronics manufacturing ecosystem of global standards in Andhra Pradesh. We welcome Xiaomi to Sunrise Andhra Pradesh and India.”

Mr. Amitabh Kant, Secretary, Department of Industrial Policy and Promotion (DIPP), said: “Xiaomi is a unique example of ‘Invested by China, Made in India’. Xiaomi is known for its quality technology and craftsmanship, and has an immense following amongst young India. I am sure they will make India their home and open many more production facilities.”

The Ambassador of India to China, His Excellency Mr. Ashok K. Kantha, said: “I congratulate Xiaomi on this important milestone in their India journey. As an innovative global technology company, the manufacturing of Xiaomi products in India is a demonstration of Xiaomi’s commitment to India and a recognition of the potential for win-win economic collaborations between India and China. I am confident Xiaomi will be an example and encouragement to other Chinese companies that are looking at India. We are happy to support their efforts in building trade and investment links with India.”