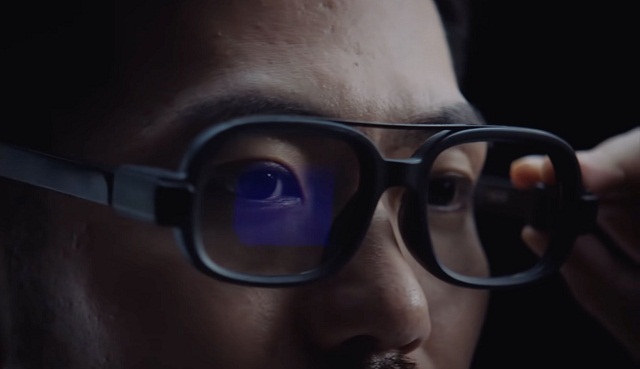 To match the form of ordinary glasses, subtle challenges on imaging and internal component arrangements must be overcome. Xiaomi Smart Glasses adopts MicroLED imaging technology to lower the design space needed in structural design, as well as the overall weight of the device.

In order to fit the imaging system seamlessly into the frame, MicroLED undoubtedly is the most optimal choice. Like OLEDs, MicroLEDs pixels are individually lit – its emissive property allows for brighter displays and deeper blacks. But MicroLEDs have a higher pixel density and longer lifespan while having a simpler structure. This allows for a more compact display, as well as easier screen integration.

The grating structure etched onto the inner surface of the lens allows light to be refracted in a unique way, directing it safely into the human eye. The refraction process involves bouncing light beams countless times, allowing the human eye to see a complete image, and greatly increasing usability while wearing. All this is done inside a single lens, instead of using complicated multiples lens systems, mirrors, or half mirrors as some other products do. Optical waveguide technology significantly reduces device size and weight, and therefore allows smart glasses to approach the form factor of traditional glasses.

Xiaomi Smart Glasses integrates a total of 497 components including miniature sensors and communication modules, so it is not just a “second screen” for your smartphone, but instead functions as a new smart terminal with independent operating capability. In addition to basic notification, call display, etc., it can also independently complete functions such as navigation, taking photos, teleprompter, and real-time text and photo translations. Considering usage, key interaction logic has also been implemented to minimize interruptions at inconvenient times, and display important information timely when critical.