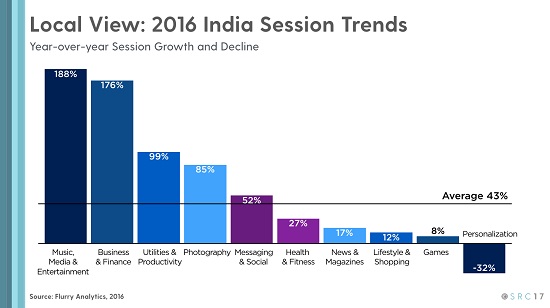 Flurry Analytics, division of Yahoo, Inc announced the findings for ‘State of the App Nation in India’ – the study uncovers insights around mobile app activity and their usage, emerging growth categories and device adoption trends in India.

The ‘State of the App Nation in India’ study is backed by data gleaned from over 940,000 applications, across 2.1 billion global devices from across the world, and the 58,000 apps, across 147 million devices from India, that use Flurry.

The trends (see more detailed insights from Flurry below) show Asia and India leading the phablet revolution. The phablet (devices with screens between 5” and 6.9”) is the fastest growing mobile device globally. In India, phablets have a market share of 61%, outpacing growth in the US which has 48% market share. When looking into the mobile usage in India, one major trend emerged: India’s mobile usage looks a lot like global usage did six months ago, still ascending on the growth curve but not at the rate we saw the year prior.

Presenting the study in Bangalore, Christopher Klotzbach, Director, Flurry from Yahoo said, “As smartphones celebrate their first decade; the mobile app industry has grown into a dog-eat-dog world. The decelerating rate of global growth could signal market maturity, saturation or simply the end of the app gold rush.” He added, “Going back to India’s six-month mobile trend delay, there’s no better time for local developers to innovate, and lessen or possibly stop a local industry pause. We are excited to see what app developers do in the next decade and watch which industry they chose to disrupt, again.”