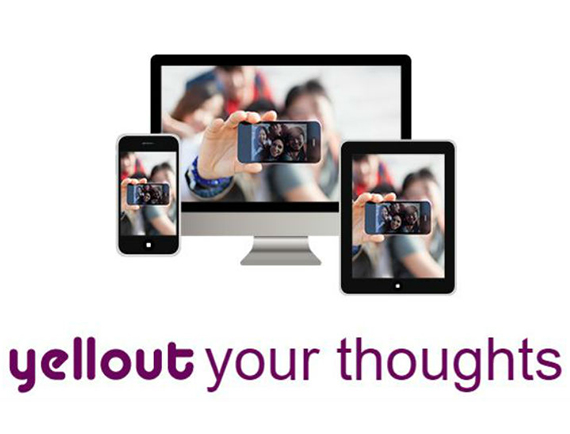 Yellout, a first of its kind video recording and engagement platform for enterprise & government was launched.Using video content for engagement from “One-to-Many”, is done easily enough, however there is no platform that has effectively addressed the area of “Many-to-One” i.e. user generated video engagement until Yellout

The problem faced by enterprise and governments is simple. Where and how can they get hundreds and thousands of their users to “reverse broadcast” videos to them and truly engage with them.

Yellout is a unique platform that changes the very syntax of video engagement. It is a plugin that enables enterprise, business and government to instantly create video campaigns, where end users can directly engage with them, via user generated video content. This video content flows into an organizations portal, app or platform, whilst giving complete approval, moderation and ownership rights.

A good example would be Kolkata Knight Riders who are using Yellout for video engagement campaigns with their fans in this year’s IPL. Thousands of fans can now create videos and engage with the team on KKR’s Fanzone. Apart from KKR, Galgotias University and The Egg Factory feature among the brands who have adopted Yellout.

Campaigns can be external such as contests, customer feedback & reviews, video communities, video polls and citizen participation; or internal, such as video interviews, interactive HR & sales communities, video reporting & information system and many more. All this with an additional layer of analytics and easy integration.

Yellout was launched today by Raj Gopalakrishnan who has also co-founded and led multiple media ventures including Blue Mango Films, Zeppelin Design and Firefly Entertainment. Raj has rich experience in marketing and content development of over two decades, and his previous ventures have been deeply engaged with technology. The idea of Yellout was the brainchild of Bindiya Murgai, co-founder of Blue Mango Films and Yellout Tech Labs.

Yellout’s easy to use DIY form, builds the end user video campaign in a matter of minutes to go live instantly on multiple sites/apps/digital assets. Once live, content management which includes – approval, moderation, cross filter sorting, social media integration and analytics is through a single easy to use dashboard.
Each aspect of the campaign creation module is customizable, thereby making every campaign unique. Customers have the option of only collecting video content, using raw data, or launching an entire campaign.

Yellout has been built keeping the customer’s end user in mind. While detail has gone into the campaign builder for the customer, the ultimate engagement is with the end user.

Therefore, Yellout’s recording interface is extremely simple yet engaging. The user has the option of recording a fresh clip or using a pre-recorded one. The engagement is further enriched with tools for trimming the clip, adding background music, sound effects and visual filters. Once approved, users can further share and download their videos (now branded UGC) across social media, resulting in explosive amplification.

The value proposition is two-way video engagement (process & content wise) of end users, by end users to enterprise and government.