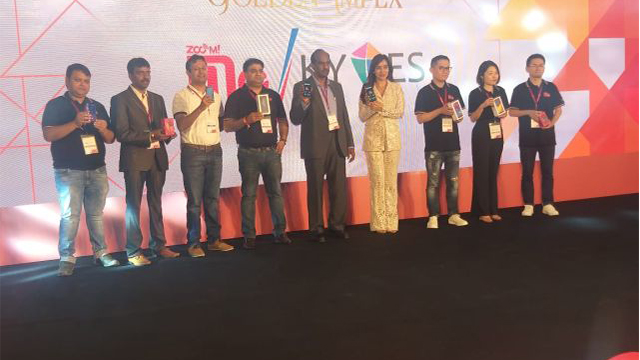 Shenzhen Guowei Network Service Limited, a professional and well-established mobile device OEM / ODM supplier, headquartered in Shenzhen, China, announced today that they have their mobile brand, Zoom m and Kites Indian to launch in the market has partnered with Golden Impex group. The company is trying to market 3 smart phones and 7 feature phones under its own brand.

Brand launch was done by the famous actress and model, Ms. Neha Sharma Bollywood.
Vice on the launch, Mr. Rajiv Tiwari, sales and distribution, said the primary purpose of any business start up is to provide the right product, at the right time and the right price and make a strong business relationship. “Our target customers are mainly those who might yet feature phone segment, but smartphones are eager for the opportunity to enter the segment. The price we buy smartphones from your nearest retail outlet to use the target audience will benefit. there are our product has been designed to provide the best 4G on the latest Android platform . ”

Speaking to the media during the launch, Mr. Ma include Xian – Zoom m vice president of mobile foreign trade, said that the Internet of Things (IOT) device from smart devices with related products worn which, from feature leading manufacturers of phones and smart phones. We are entering a strong but growing Indian mobile phone market with the launch of its smart phones. We’re confident that will be able to make our technically sound money value products to their place in India. ”

Zoom under the M brand, today launched mobile phones are a part of the popular and sophisticated “M” series. There are three varieties of M Series mobile M1, M2 and M3. M1 range 18: 9 full view, 14 cm 2.5D IPS display and comes with the ROM 3 GB of RAM and 32 GB, which is expandable up to 128 GB. Android 9.0 operating system and MediaTek Cortex A dual rear camera set in the smart phone based on 53 quad-core processor (up 13.0 flash MP + 2.0 MP) and the next camera 13.0 MP with flash. In addition, M1 is the fingerprint sensor and a powerful 3200 mAh battery in the smart phone. M1 Smart Phone 7349 / – will be available at a retail price of Rs.

M3 range of smart phones based on Android 9.0 operating system and MediaTek Cortex A53 quad-core processor, 15.5 cm IPS display – Watrdrop Notch, 3 GB of RAM, equipped with 128 32 GB GB can be expanded up to storage, 13.0 primaries with MP + 2.0 MP AF Flash camera and a 8.0 MP secondary camera. It is powered by the battery of the phone fingerprint sensors and 3,300 mAh. M3 smart phones will be available at 7875 / – the retail price.

“Growth in the Industry reports indicate that mobile Internet users is now due to people in rural areas, which obviously means that there will be a considerable increase in demand for smart phones such areas. The truth is that in the rural areas of India, access to mobile phones is much higher than the TV. Just all the basic mobile phone after some time user will be looking to use smart phones. We are fully prepared to provide cities and through-rate of a developed services to rural markets such other consumers Indian cities as a brand, “Rajiv Tiwari, vice president of sales and distribution.

The company has three R & D centers, including Shenzhen, Guizhou and Kunming cities in China. Its global sales network is available in major markets of Thailand, Taiwan, Japan, Sri Lanka, Vietnam, South America, United States, Iran, France, Africa’s World. Besides, the company make Creations for manufacturing under the India program Corporation has entered into an agreement with Pvt Ltd, which will be manufactured in India and zoom m and lifelong Anyany rights of mass production will have their Kites during the sale.

268 Mobile in India firms are registered and we are at 269 th position. The company is trying to achieve retail achievement of 7,000 outlets. “In the second phase, the estimated goal to be present in 10,000 outlets across India. 2020 India to the extent of the total business of Rs 1,000 crore can provide us with a good residency, Mr. KPK Selvaraj, owner Jhummi Mobile brand in India, president of Golden Impex.

The offer while speaking to the media during Mr. S. Pranesh – President, Golden Impex, said that the primary objective of the business from the beginning on the right product, at the right time, provided at the right price and make a neutral business relationship. “To gain market share in this category, we continuously 2 main channels – would like to build a market by positive word of mouth through retailers and user clients. Offline and through to the product and the correct and consistent Mhtwyukt the fundamental things of service with an important message by online mediums it could be possible. From there we are expecting annual growth of 30%, “Mr. S Pranesh – President, Golden Impex.