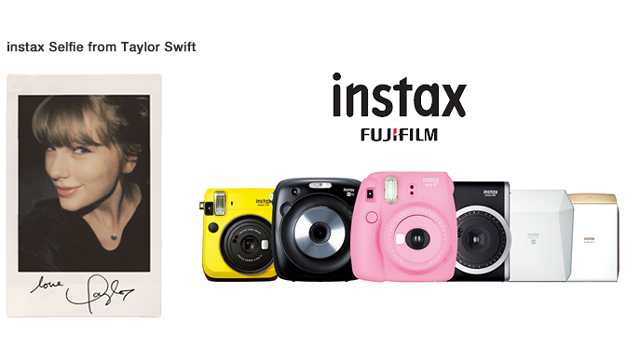 FUJIFILM Corporation has announced a global partnership and a global tour sponsorship with world-renowned singer, songwriter, musician, producer and 10-time GRAMMY award-winner Taylor Swift for its instax series of instant cameras. A sweeping promotional campaign for instax will be rolled out worldwide with Taylor’s participation, starting in summer 2018.

Fujifilm’s instax series of instant cameras, which let users shoot pictures and make beautiful color prints on the spot, have been a global hit in more than 100 countries and regions, with over 30 million units shipped since the product first went on sale in November 1998. This year, as instax celebrates its 20th anniversary, Fujifilm aims to further explode in popularity through a major campaign in collaboration with Taylor Swift, who has approximately 300 million global social media followers and unparalleled influence among young people. Fujifilm will convey to an ever wider global audience the excitement that only instax can deliver: truly one-of-a-kind photos with the unique feel of a physical print together with Taylor, herself a longtime instax user. She will be appearing in television commercials and an online campaign.

Fujifilm is also a global sponsor of the TAYLOR SWIFT reputation STADIUM TOUR, which has already set an all-time attendance record for its first date in Glendale, Arizona May 8th. Concert stadiums will feature custom instax experience booths for fans to enjoy and interactive digital brand promotion activities running throughout the year. In addition, Taylor Swift has announced today that she will bring the “TAYLOR SWIFT reputation STADIUM TOUR in Japan presented by FUJIFILM instax” to Tokyo November 20 and 21, and Fujifilm is thrilled to be the presenting sponsor. Stay tuned to TaylorSwift.com for further show information as it becomes available.