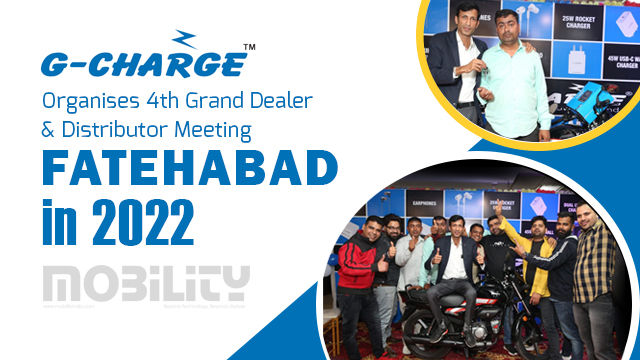 G-Charge Mobile Accessories, one of the leading manufacturers in mobile accessories had organised an awesome dealers meet in Fatehabad, Haryana. The one-day event was a good platform to nurture with the 125 dealers and 5 Non G.T. Belt (Haryana) Distributors.

This event was organized to also reward the dealers and distributors who have achieved their targets. This event is the fourth such meet which has been organized this year and it acts as a platform to lie in sync with the ideas of the dealers, distributors. The earlier three such events were held in Kurukshetra, Yamuna Nagar in Haryana.

Some of the dealers have been accoladed awards like a Bike etc and it was accompanied by an award night to add a feather to the cap.

A strong dealer partnership is an integral part of the manufacturers. Dealers provide that private relationship that builds loyal customers and, ultimately, increases sales. The brand has always insisted on strong dealer relationships so as to boost sales and eventually growth of the company.

Similarly having a good relationship with the distributor is one of the most important things that all focus on. Communication and networking are some aspects which are an essential part of any relationship.

Mr Gaurav says, “We have realised that the dealers are important and they are the company’s spokesperson.The dealers sell the products and become loyal advocates for brand. We also feel and believe that distributors also have a major role to play in the business hence we do keep on having such get-togethers to strengthen the relationship with them. “

G Charge had Award night, Cocktail & Dinner and plans to have dealer meet in Punjab as well. It was established in 2012, manufactures and provides mobile accessories with the latest technologies and features that users require.