Gionee fortifies distribution network by 30%; takes channel partners to #Selfiestan for a meet and greet with the RCB and KKR 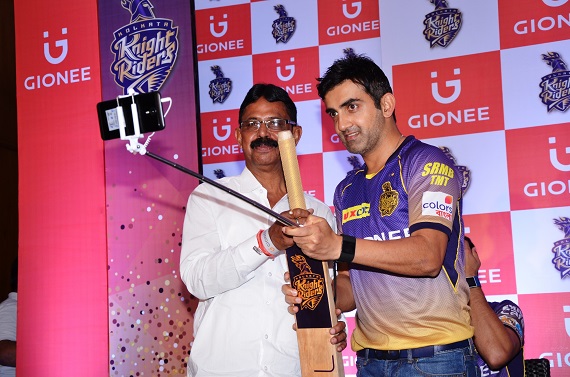 Gionee has grown its distribution network by 30% and has doubled the national distributors in the country. With an endeavor to strengthened Gionee’s association with their channel partners a special meet and greet event was organized with Royal Challengers Bangalore and Kolkata Knight Riders across the country.

Started on April 6th, the meet and greet events with the players wrapped up with their final event today in Delhi. Engaging with over 1000 channel partners across India, Gionee covered 7 cities with meet and greet opportunities with the two IPL Teams – RCB and KKR. These cities were Rajkot, Mohali, Hyderabad, Kolkata, Mumbai, Bengaluru and Delhi.
Gionee has been the principal sponsor for ‘Kolkata Knight Riders’ in the league for the last 3 years. Taking its association with the biggest cricket extravaganza forward, the smartphone giant also bagged jersey sponsorship for Royal Challengers Bangalore this season, hence becoming the first brand ever to bag the jersey sponsorship for two IPL teams in the same edition.

With these meet and greet events, the handset manufacturer engaged its channel partners through ‘selfies’ and ‘groupfies’ with the RCB and KKR players.

Strengthening its offline sales with focus on customer service, Gionee does not believe in flash sales and has steadfastly followed a different approach. As a result, Gionee today has a presence in 42,000 retail outlets with nearly 70% exclusive stores. In fact, the brand today sells only 1 per cent of its stock online, rest is offline.