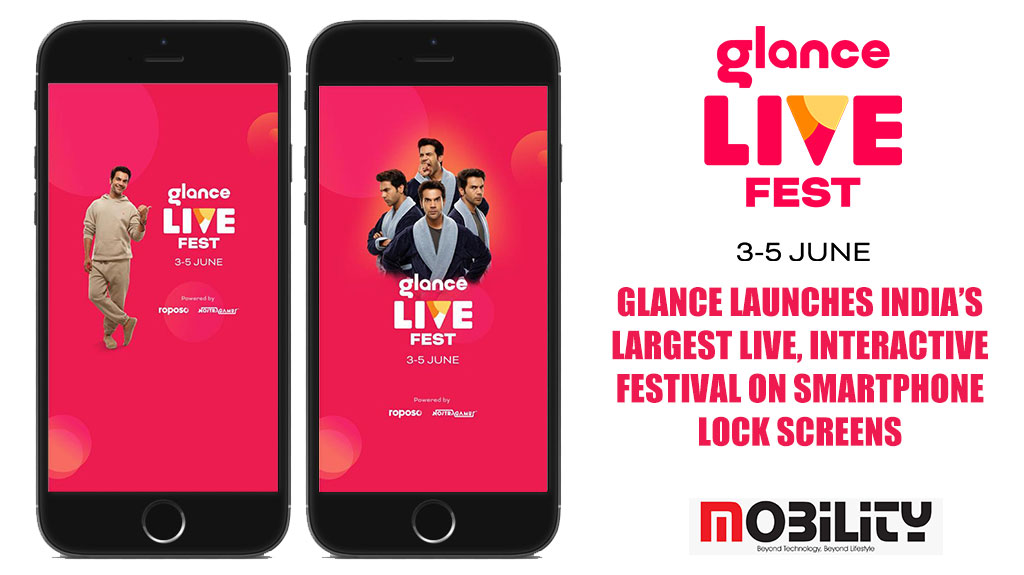 Singapore/Bangalore, May 19th, 2022:Glance, the world’s leading lock screen platform, is bringing users the Glance LIVE Fest (GLF) – India’s largest digital carnival of live, interactive experiences on lock screen. Over 70 million users will enjoy live, interactive, and transactional content from some of India’s biggest celebrities and creators across entertainment, gaming, and shopping in this three-day extravaganza. The first edition of GLF will be streamed on Glance and Roposo – Glance’s creator-led live entertainment commerce platform – through June 3, 4 & 5, 2022.  GLF content will also be available onGlance TV.

Glance is building the world’s largest ecosystem for live content and commerce on screen zero (smartphone lock screens and home screens of smart TVs). It is empowering users to go beyond just watching, to shaping the narratives of live shows through unique interactive features. GLF will heighten this experience of active real-time participation with all-new, star-studded immersive experiences.

During GLF, users will decide challenges for Bollywood star Rajkummar Rao in real-time through live polling and watch as he races to complete those. They will get a chance to learn about the best and worst trends in fashion from Karan Johar through interactive shows.They can see themselves on lock screen with live virtual billboards during shows hosted by celebsand take virtual selfies with several of their favourite stars.

GLF will also turn the lock screen into a shopper’s paradise, powered by Roposo. In ‘Fashion Premier League’ users will vote to decide India’s most fashionable cities as creators fight for their respective city’s glory. These creators will showcase the best local shopping spots in their hometowns. Users will be able to shop for these products and get to enjoy local markets across the country from the comfort of their homes. Celebrity-led product lines will also be launched.

“TheGlance LIVE Fest is giving the world a space where millions can come together and become part of spontaneous, joyful moments of life. Connection, authenticity, and spontaneity are basic human truths that drive each one of us. The Glance LIVE Fest brings all these together for us in the digital world through

“LIVE can come to life not just when there is a great creator putting on a show, but when people can shape the narratives themselves. All Glance LIVE Fest experiences will celebrate this power of interactivity and engagement that Glance brings to its users,” said Rohan Choudhary, VP & GM, Glance Feed.

During the GLF, sports fans will witness explosive live interactions between cricketers who are known for their legendary rivalries on the field. These include Virender Sehwag & Shoaib Akhtar, Harbhajan Singh & S Sreesanth, Venkatesh Prasad & Aamer Sohail. Popular music acts are planned with artists including Jasleen Royal and Akasa Singh. Glance’s massive Gaming community will be on the edge of their seats, as over 100 colleges from across India participate in Season 1 of College Battleground. The carnival atmosphere will hit its peak with liveDJ sets from the clubs of Goa on all three days of the festival.

Rajkummar Rao will be the face of the consumer campaign for the GLF this year and Glance is launching a series of campaign films with the actor. To watch his hilarious reactions to being left out of the GLF, follow @glancescreen on Instagram.

Founded in 2019, Glance is a consumer internet company that has created two highly disruptive digital platforms – Glance and Roposo. Glance has redefined the way internet is consumed on the lock screen, removing the need for searching and downloading apps. Over 400 million smartphones now come enabled with Glance’s next-generation internet experience. Roposo has revolutionized commerce by launching a destination for creator-led live entertainment commerce. Headquartered in Singapore, Glance is an unconsolidated subsidiary of InMobi Group and is funded by Google and Mithril Capital. For more information visit glance.com, roposo.com and inmobi.com