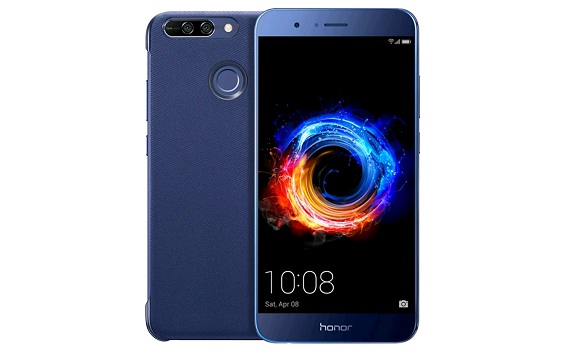 After the huge success received from the Honor 6X, Honor continues to partner with Amazon India to launch the Honor 8 Pro  an another Amazon exclusive.

The metal-bodied Honor 8 Pro looks simply stunning. Its tiny bezels flow seamlessly along the edges, creating a visual masterpiece, which is also coupled with a diamond cutting process using CNC for greater precision to create one of the slimmest smartphones ever. Micron-level sandblasting and a 360° high-pressure air polishing process helped to produce a phone that is extremely smooth to the touch.

Despite supporting a massive 4000 mAh battery, dual-SIM hybrid slot, and a 14.47 cm 2K display, the  Honor 8 Pro’s ultra-thin 6.97mm metal body is a compact cluster of over 1,000 components, a perfect blend of functionality and aesthetics. All in all both navy blue or midnight black, the Honor 8 Pro looks absolutely stunning.

The Honor 8 Pro running on the latest 16NM Kirin 960 octa-core processor backed by 128GB ROM (that can be further expanded via micro SD card to 256GB), it tackles the issue of fragmentation and lag that has long beset Android devices. The Honor 8 Pro is improving the gadget’s CPU single-core and multi-core performance by 10% and 18% respectively, making it faster to open applications. The GPU performance is increased by 180%. Furthermore, the EMUI5.1 enables the general optimization of Android and minimizes stuttering issues. The Mali-G71 includes support for the cutting-edge Vulkan graphics, computes API and boosts graphic performance up to 400%. Honor 8 Pro will run the most demanding games at high frame rates with minimum lag and dropped frames, even in 3D.

The Honor 8 Pro’s combination of cutting-edge hardware and software culminates in its 12+12-megapixel dual-lens camera. The two lenses work in tandem to always deliver the perfect shot: the monochrome lens captures a black-and-white image with incredible depth of detail while the RGB lens ensure faithful and vivid color reproduction – and sophisticated software brings the best of two worlds together. The camera’s wide aperture range (f/0.95–f/16) delivers the DSLR-like depth of field effects for both photo and video shooting. The Honor 8 Pro brings perfect optimization of hardware and software to deliver that perfect shot. The device also supports 4K video recording, encoded in the efficient H.265 codec, which produces files twice as small as its predecessor. Thanks to the EMUI 5.1, Highlights-a new feature co-developed with Go Pro, intelligently organizes photos by category and automatically generates video stories that are easily customizable – making sharing memories a breeze. The new EMUI 5.1 designed for Android Nougat, constantly learns from your behavior and habits. The Honor 8 Pro has managed to successfully overcome the fragmentation issue usually associated with Android-operated systems.

Honor 8 Pro is the best looking smartphone in this segment and it also offers great specs in an affordable price.