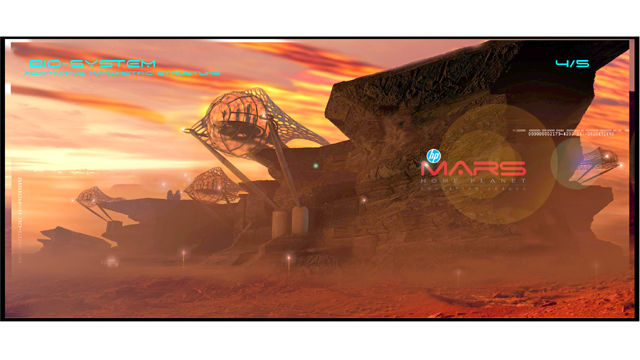 HP unveiled a groundbreaking virtual reality (VR) simulation of what life on Mars could look like for a human population of one million people. The HP Mars Home Planet program, led by HP and NVIDIA is the culmination of a year-long engagement with the creative community to simulate life on the Red Planet.

The program attracted over 90,000 creative professionals, architects, engineers and students spanning more than 150 countries. The most innovative ideas were brought to life through a VR experience created by Technicolor that premieres this week at SIGGRAPH, the world’s largest conference on computer graphics. The non-VR trailer is available now at https://youtu.be/DU7A8Q00xWw

“The ultimate power for fully-immersive VR experiences comes from the creative community and the computing process delivered by HP and our partners,” said Xavier Garcia, Vice President and General Manager, Z by HP, HP Inc. “HP’s technology leadership, rich history of product innovation and understanding of the creative workflow is bringing amazing ideas to life.”

The HP Mars Home Planet VR experience takes users through a Martian Community Onboarding Center, showing innovations in areas such as architecture, engineering and transportation that enable humans to make the leap to Mars. Technicolor developed the stunning visuals for the experience in Epic’s Unreal Engine, resulting in the first ever six-degrees-of-freedom VR piece built for motion-enabled chairs, using HP Windows Mixed Reality headsets. The environments and key assets from the VR experience will be released back to the creative community through an Unreal Engine download this fall.

“We are living in interesting times when technological advancement is being met by a broad array of foundational space science and planetary research—a confluence that will optimistically serve to accelerate our path toward human exploration and settlement of Mars,” said Dr. Darlene Lim, Principal Investigator, NASA Biologic Analog Science. “Today, people around the world are dreaming and innovating towards this future, and the amazing entries from the HP Mars Home Planet project’s creative community give us a virtual window into what life on Mars could be like for a million members of humanity.”

Universities and schools worldwide also took on the universe-changing effort of reinventing, designing and experiencing life in an urban area of Mars Valley in VR. Supported by HP technology and leaders in higher education, these institutions created teams as part of the Education League for HP Mars Home Planet. Ten universities in Europe and two universities in Australia competed in the project, with Japan conducting a separate contest with 110 submissions—judged separately—to select winners who submitted entries to HP Mars Home Planet.