Save & Celebrate More this Diwali with AIWA’s BIG DIWALI SALE! 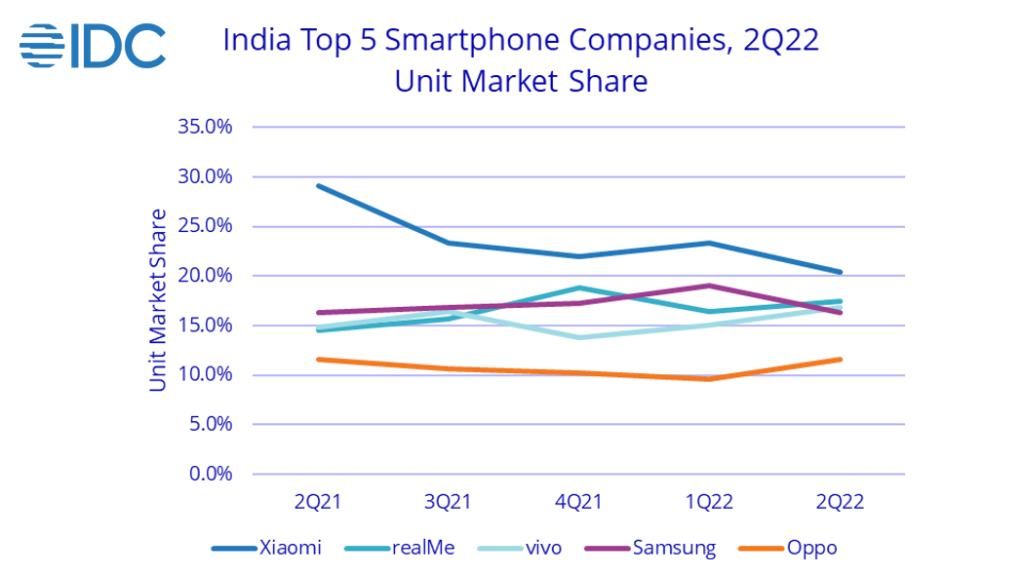 35 million smartphones were shipped to India in 2Q22 (April-June), a 3% year-over-year (YoY) growth, while the first half of 2022 declined by 1% YoY to 71 million units. The second quarter of the year normally has seasonally strong demand compared to the first quarter, but dwindling consumer demand led to a decline of 5% quarter-over-quarter (QoQ).

“The primary challenge in 2021 was around supply constraints, which have eased considerably. However, the market is now facing demand contraction in 2022 due to rising inflation and higher input costs, leading to higher market prices. As a result, the inventory cycles are increasing across brands and channels,” said Upasana Joshi, Research Manager, Client Devices, IDC India.

• The online channel reached a share of 52% with 5% YoY growth; this is expected to stay strong in the 2H22 (Jul-Dec) festival season, with more promotions during the sales events by e-tailer platforms. The offline channel registered flat growth of 1% after declining YoY for three consecutive quarters.

• UNISOC’s share continued to rise, reaching 17% in 2Q22 while MediaTek’s share dropped to below 50%, which has not been seen since 2020. The shipment and shares of Qualcomm and Samsung-based smartphones increased.

• The premium segment of US$500+ was the highest growing segment with 83% growth YoY, contributing 6% of the market. Apple continued to dominate with 53% share, followed by OnePlus (19%) and Samsung (15%). The mid-range segment of US$200-US$300 accounted for 17% of the market, growing by 21% YoY and continues to be focus area of vendors with several model launches slated in the next few months. The highest decline was in the sub-US$100 segment, which was down to 17% share of the market from 22% a year ago.“5G smartphone supplies are much better than 4G, leading to higher ASPs but lower demand. The mass segment of below US$200 has seen fewer new launches. On top of this, inflationary stress is impacting consumer demand and is not expected to ease anytime in 2H22. These factors will certainly impair 2022 to be flat,” says Navkendar Singh, Associate Vice President, Devices Research, IDC India, South Asia & ANZ.

Xiaomi continued to lead but was the only vendor amongst the top ten with declining shipments (-28%) YoY in 2Q22. It faced supply constraints through 1H22, especially in the sub-US$200 segment. But 2Q22 was the launch quarter of its Redmi 10 series, which together with Redmi 9A Sport and Redmi Note 11, accounted for 35% of its shipments. Xiaomi dropped to the third slot within the 5G segment, which contributed 25% of its overall shipments.

realme climbed to the second slot for a second time, with a strong YoY growth of 24% (highest among top five vendors) in 2Q22. It cemented its second position in the online channel with 23% share with affordable model offerings in the C-series. With two-thirds of its portfolio on UNISOC chipsets, realme ensured strong supplies in the entry-level price segment.

vivo climbed to the third slot, growing by 17% YoY. It continued to lead the offline channel with 24% share. vivo was the second largest 5G smartphone player in the Indian market with 33% of its smartphones as 5G. Expansion in the online channel through its T-series and new launches in the sub-brand iQOO led to a surge in its online share.

Samsung dropped to the fourth slot, registering a weak 2Q22 with a growth of 3% YoY. Despite a refreshed portfolio, demand remained low, while ASPs climbed to US$250 (highest amongst the top five vendors). It continued to lead in the 5G segment with 46% of its shipments as 5G smartphones.

OPPO, in the fifth slot, witnessed a meagre growth of 2%. It focused on the mid-premium segment with launch of the F21 Pro and expanded in the online channel with the K-series. However, the supply constraints persisted in the affordable segment.

Save & Celebrate More this Diwali with AIWA’s BIG DIWALI SALE!