iVoomi Me4 and Me5 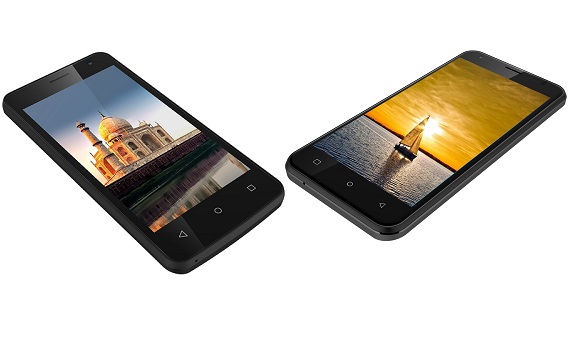 iVOOMi, a Hong Kong based brand of SUNTEX, was founded in 2001, with presence in Hong Kong, China, Thailand, Philippines, Ethiopia & Middle East. It comprises of more than 350 SKUs, spread over 5 product categories. iVOOMi has its client base spread across 21 nations worldwide.

Today they have announced the launch of its two new models of smartphones Me4 & Me5 and adds onto to its successful “Me” series.

Talking first about iVoomi Me4, the dual-SIM smartphone sports a 4.5-inch FWVGA (480×854 pixels) display. The smartphone is powered by a quad-core processor clocked at 1.1GHz coupled with 1GB of RAM and Mali T720 GPU. In terms of optics, the Me4 comes with a 5-megapixel rear camera, with LED flash support, and a 5-megapixel shooter at front as well. The iVoomi Me4 comes with 8GB of built-in storage, which is expandable up to 64GB through microSD card. The connectivity options offered by the smartphone include 4G VoLTE connectivity, Wi-Fi 802.11 a/b/g/n, Bluetooth, GPS, and a 3.5mm headphone jack. It measures 136×66.8×10.2mm and weighs 113 grams. The Me4 houses a 2000mAh battery.

The Me 4 is launched at sub 4K segment at a price of 3499/- so it is currently the cheapest smartphone with Android Nougat 7.0. and is its main USP. Overall look and feel of the device is very basic, and an average performer. The smartphone comes with a polycarbonate body,  the smartphone has the camera module and LED flash placed under the camera, at the back, the selfie camera on the iVoomi Me 4 is placed on the left-hand side,at the bottom, you will find the capacitive touch buttons.

The Me5 phone is a 4G VoLTE Smartphone and comes with a 5-inch HD IPS display with a resolution of 1280 pixels by 720 pixels. iVooMi Me5 is powered by 1.2 GHz Quad-Core processor and it comes with 2GB RAM. The phone packs 16GB of internal storage that can be expanded up to 128GB with a memory card. iVooMi Me5 packs a 8 megapixel camera on the rear with LED flash and 5 megapixel front camera. iVooMi Me5 runs Android Nougat v7.0 and is powered by a 3000mAh battery. The dual SIM smartphone supports 4G VoLTE/ 3G/ 2G network on both sim slots. The phone supports MP3 audio player formats; connectivity options include Wi-Fi and Bluetooth. The phone is covered under one year manufacturer warranty. The user interface is smooth not much issues with any feature included in the phone, they have done decent job  in optimizing the software. But other then that not much of change from its predecessor M1+. Overall we can say that the Me 5 is a good budget option if you want to looking for Android N.