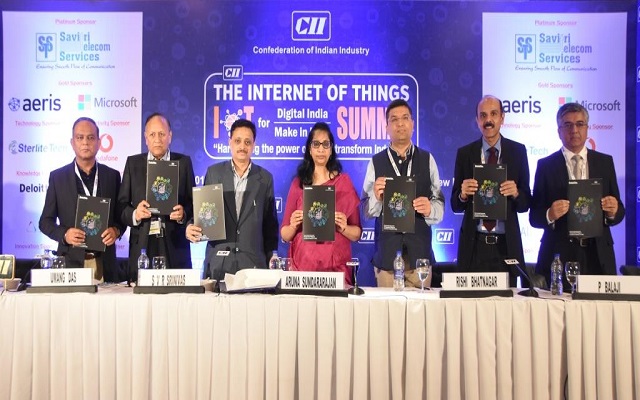 National Telecom Policy (NTP) 2018 will be unveiled soon, said Smt Aruna Sundararajan, Secretary, Department of Telecommunications, Ministry of Communications, Government of India while speaking at The Internet of Things (IoT) Summit organised by Confederation of Indian Industry (CII) today at New Delhi. Smt Sundararajan mentioned that the policy is being framed after a lot of deliberations and opinions sought from the ecosystem, including industry and the regulator. She emphasized that NTP 2018 will be based on three broad pillars viz. core networking & communication ecosystem that will facilitate IoT, IoE & 5G; preparing the rest of the ecosystem to be ready for a new paradigm shift; and how India will position itself as a contributor to IoT & 5G as leader and not just a consumer.

In his special address,Mr S V R Srinivas, Principal Secretary (IT), Government of Maharashtra, said, “As part of the Digital India programme, the State of Maharashtra has embarked on several initiatives to enhance the economic growth, improve the ease of doing business, improve infrastructure and make the State a preferred investment destination. Maharashtra is the first state to formulate comprehensive FinTech Policy as well as policies on Cloud, Telecom Infrastructure and Artificial Intelligence. As part of the state-led implementation model, we are executing broadband network deployment across 13,000 Gram Panchayats. These initiatives would help assure a digitally and IoT empowered knowledge economy.”

Dr Rishi Bhatnagar, Summit Chairman & President, Aeris Communications India in his welcome address emphasized that consolidation of technology; new business model and excellent customer experience are the crux of IoT. He further added that in India, there is a huge business opportunity in IoT, and given the economies of execution our nation demands, it would not be wrong to say that India will soon drive the world market for integrated solutions in the near future.

Mr Umang Das, Chairman, CII National Sub-Committee on Telecom Infrastructure said that Infrastructure will play a crucial role for better implementation of connectivity. He opined that India should lead in setting standards for IoT and 5G.

Mr Vinod Sood, Managing Director, Hughes Systique in his address said that India is a growing hub for IoT solutions and the Indian IoT ecosystem is rapidly expanding owing to demand by both the industrial and consumer IoT applications. He added that the growth of tech savvy consumers is another drive that is propelling this market.

Mr P Balaji, Director – Regulatory, External Affairs & CSR, Vodafone India Ltd said that IoT is becoming ubiquitous and the sophisticated way it is being used is digitalising industries and fundamentally changing the way they do business.

A CII-Deloitte report titled ‘Harnessing the power of IoT to Transform Industry’ was also released during the summit.