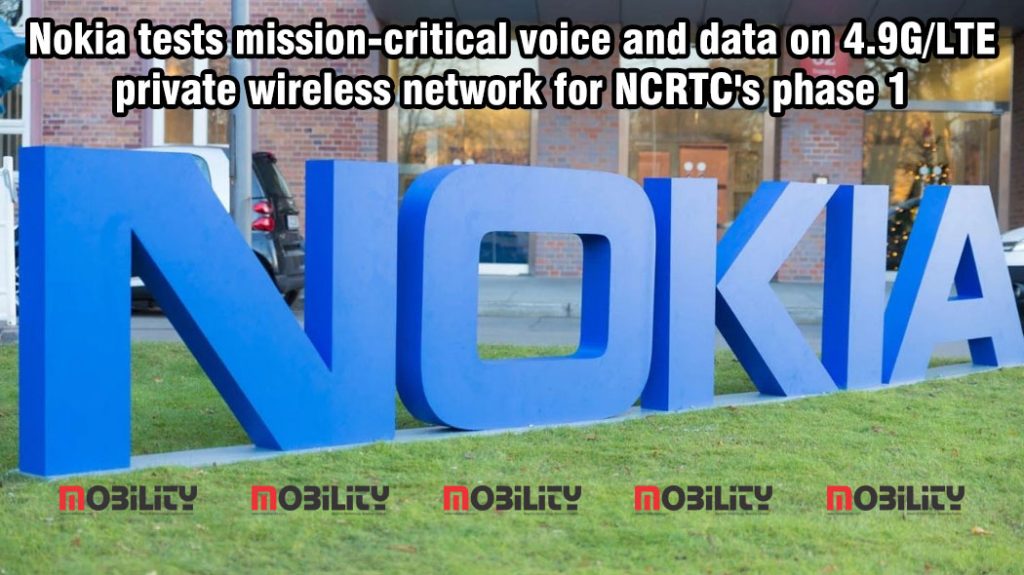 Nokia announced that it has successfully completed testing of voice and data call, over the world’s first 4.9G/LTE private wireless network to support European Train Control System (ETCS) Level 2 Signalling, for phase 1 of NCRTC’s Regional Rapid Transit System. The project, covering 82 km rail route with 25 stations between Delhi and Meerut, will be implemented in four stages and will be completed by 2025.

4.9G/LTE’s ability to support advanced broadband applications makes it the technology of choice to support mission-critical voice signalling. This is a world first application of an LTE network that is being used along with ETCS Level 2 signalling to provide high-speed, high-reliability commuter service. In addition, ETCS Level 2 based system allows trains to report their precise location in real-time which will further help to send alerts to the commuters by sharing the trains’ exact location and decrease the waiting time at the train stations.

Mr. Thameem Kamaldeen, Signalling Director, at Alstom India, said: “We are pleased to work with Nokia on this exciting project for NCRTC to provide high-speed connectivity between New Delhi and Meerut. The initiative will significantly transform the region by opening new opportunities for citizens while providing a sustainable and safer travel option for them.”

Mr. Kamal Ballout, Head of Enterprise Solutions CHIMEA (China, India, Middle East and Africa) at Nokia, said: “We have worked closely with major railway operators to bring the benefits of private LTE connectivity and pave the way for the adoption and deployment of Future Railway Mobile Communication System (FRMCS). As India’s trusted telecom vendor, we are thrilled to partner with NCRTC for the deployment of a high-speed LTE network between Meerut and New Delhi and are looking forward to building a world’s first for NCRTC*”.

Nokia has deployed mission-critical networks to more than 2,200 leading enterprise customers in the transport, energy, large enterprise, manufacturing, webscale, and public sector segments around the globe. It has also extended its expertise to more than 485 large private wireless customers worldwide across an array of sectors and has been cited by numerous industry analysts as the leading provider of private wireless networking worldwide.