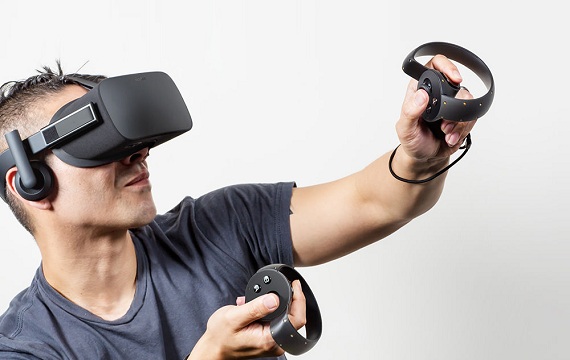 An all-new standalone headset that doesn’t require you to snap in a phone or attach a cable. It’ll be available early 2018 and cost $199. Oculus Go is hands-down the easiest way for people to get into VR. It’s perfect for people who haven’t experienced VR before to play games, watch movies, or hang out with friends. Oculus Go features orientation tracking and will ship with a 3DOF controller. Dev kits will ship in November.

The latest update to our work on Santa Cruz, a completely untethered, positionally tracked headset. Over the past year, we’ve brought in fully tracked 6DOF controllers to enable true hand presence in a standalone form factor. This helps deliver Rift-like immersive content in a standalone headset. We’ll get them into developer hands next year.

The new UI and universal menu experience in Rift. Bring your entire PC desktop and dock of apps to an overlay that carries across your virtual space; use intuitive Touch controls to work and play in VR.

Opens up the platform for customization and expression. Design your own place in VR with environments, decorative elements, and interactive gadgets. You can also share and visit your friends’ places to see what they’ve created, with more opportunities for co-presence in the future.

Venues is a brand new experience launching next year that lets you watch concerts and catch premieres of new movies and TV shows with thousands of people. More announcements about the content line-up coming next year.

A native 3D media type in Facebook News Feed. We’re opening up the power of immersive experiences to everyone with the ability to share virtual content beyond the boundary of the headset in full interactive 3D. Starting with objects created in Oculus Medium and marker drawings from Facebook Spaces, and opening to more VR content types soon.

Immersive 3D entertainment in Facebook Spaces: A new way to experience art and entertainment created specifically for VR with your friends in Spaces. Starting with animated short stories created in Quill.

Kits in Facebook Spaces: Anyone in Spaces can make their very own kit (like a game or a set of decorations) that they can save in their space, use again and again, and share with friends. Launching this year.

Livestreaming comments in Gear VR: Now, when you livestream from Gear VR, you can see the comments your friends make on Facebook displayed inside your headset—making streaming more interactive than ever before.

We’re also adding a new app feature that helps reconnect friends in — and out — of VR. The Oculus App will notify people when a friend goes into Gear VR. From the notification, friends have the option to request to tune in. If accepted, they’ll be connected through a 2D stream and voice chat, and can even jump into Rooms if they have a headset nearby.

Pixar’s first VR experience, with the visual and storytelling magic only they could produce. Coming to Rift November 15 and Gear VR November 22, the day of the film’s release.

This brand-new experience in fan-favourite Face Your Fears directly ties to Netflix’s Stranger Things when your VR headset takes you to The Upside Down. Launching on Halloween.

Ready At Dawn, the creators of Echo Arena (Critic’s Choice Best VR Game at E3) announced Echo Combat, an expansion to the Echo universe. Take flight with this zero-g FPS in 2018.

Lone Echo earned a score of 89 on Metacritic in July, and fans have made it one of the most popular titles on the Oculus platform. Stay tuned—we teased on stage at OC4 that Liv and Jack’s story isn’t over just yet.

Respawn Entertainment, the legendary creators behind beloved franchises like Titanfall and Call of Duty, is partnering with Oculus and going all-in on a major VR title due for release in 2019.

A brand new API. We’re opening the power of our recommendation engine to let developers create custom stories and boost discoverability of their content on mobile VR.

Oculus Avatars introduced a new look, with more options for skin, hair, and clothing for a more personalized appearance. Developers will also be able to design custom clothing and accessories that match the theme of their game and app. New Oculus Avatars will launch in early 2018.

A new Oculus Debug feature that shows you exactly where you’re not hitting frame rate so you can more efficiently test and improve your Rift apps before submitting.

A rendering technology that lowers the overhead on mobile, to allow developers more freedom and richer scenes. Developed over four years in partnership with Khronos, Unity, Unreal, AMD, and NVIDIA. When enabled, Multiview renders a scene only once, making draw calls cheaper and giving the CPU more room to hit frame rate. (Without this feature, engines render the scene twice: first to render the left-eye image, and then again for the right-eye image.) An automated technique, Multiview can increase draw call performance by up to 40%.

New APIs, alongside our existing Rooms and Recently Met APIs, make it easier for developers to build safety features into their social apps and experiences. We’re starting with dedicated platform features to allow in-app blocking and reporting, available free to developers using the Rooms API. More features for more monitoring, reporting, and enforcement will come next year.