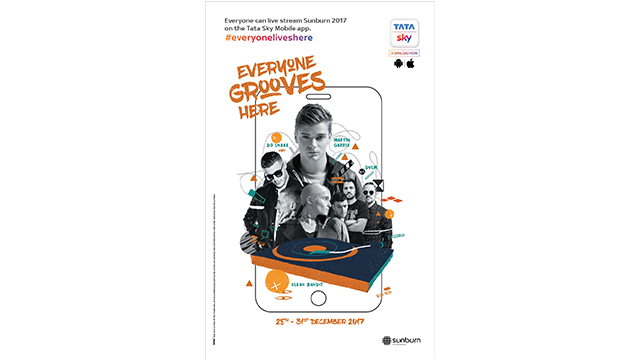 Tata Sky, India’s leading content distribution platform, tied up with Ola Sunburn Festival 2017, one of the largest music festivals in the world, to bring its eclectic mix of music, entertainment, experiences, celebration and lifestyle straight to the small screens. Apart from live streaming Ola Sunburn Festival 2017, Tata Sky Mobile App will showcase nearly 500 hours of music fest content from over the years too, which will be open to all users, including non-subscribers.

Performances by the headliners of Ola Sunburn Festival – Dimitri Vegas and Like Mike, DJ Snake, Clean Bandits, Martin Garrix, Afrojack and KSHMR – will be live-streamed on Tata Sky Mobile App. Over and above the 4 days of live streaming, prior to the event there will be a rich library of content available on demand on the app. This includes official after movies, artist interviews, exclusive backstage footage and performances from the world’s top EDM acts such as KYGO, NUCLEYA, Hardwell, David Guetta, Tiesto, Armin Van Burren and many more as well as an archive of all the past events from Sunburn season 10.

This is the first time ever that Ola Sunburn festival, which kicks off on December 28th, will be live streamed on the Tata Sky Mobile app making it the only OTT platform covering the festival live.

The sheer depth of content on offer, which will be archived on the app for viewing after the festival ends, will allow EDM fans to fully immerse themselves in the 11th edition of Asia’s largest music festival on-the-go wherever and whenever they like. Moreover, Tata Sky will broadcast snippets of Ola Sunburn Festival 2017 on Channel 100 too.

Tata Sky’s Chief Communication Officer, Malay Dikshit said, “With increasing screens and the appetite of millennials to experiment with content, it is essential to reach the entertainment needs of consumers, just the way they like it. To create endearing and impactful engagement with millennials and to bring alive content across all types and sizes of screens, the Tata Sky Mobile App has partnered with the hugely popular music festival – Sunburn.”
The Sunburn Festival, the highlight of a year-long calendar of Sunburn events, has established itself as one of the annual ‘go-to’ events for EDM fans, drawing crowds of hundreds of thousands from India and around the world every year.

To cater to these fans, Tata Sky has lined up a number of ground-breaking experiences: