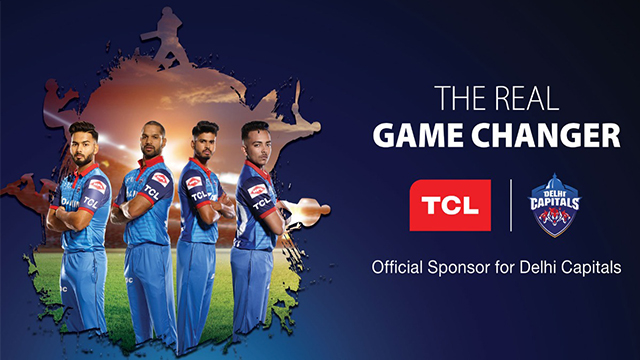 TCL Electronics, a global top-two television brand and a leading consumer electronics company, has announced its partnership with Delhi Capitals as a team sponsor for the upcoming season of the Indian Premier League (IPL). Delhi Capitals (previously Delhi Daredevils) is one of the founding members of the Indian Premier League and has participated in every edition of the popular annual cricketing tournament. As part of the association, TCL will sponsor the Delhi-based T20 team for the duration of IPL 12.

A game-changer in the television and consumer electronics space, TCL Electronics’ decision to partner with the IPL team is only natural given the latter’s status as a brand that has changed the face of cricket and sports in India. The association also taps into the synergies between TCL’s global legacy of over 38 years as a pioneering consumer electronics company – as well as the country’s 5th largest television brand as per the current market share – and Delhi’s rich cultural, social, economic, and political heritage as the national capital. Leveraging IPL’s massive reach and viewership, the brand aims to further cement its leadership position within the Indian market.

The latest development reaffirms TCL’s strong India-first approach and underlines its commitment to delivering newer experiences and innovative, cutting-edge technology affordably to the country’s vast and growing customer base. The company inaugurated its GIANT Panel factory in Tirupati, Andra Pradesh, in 2018 – its first such manufacturing facility outside of China. Expected to commence operations this year, the Tirupati unit will create more than 8,000 jobs to revitalise economic activity within the region, in addition to helping TCL provide innovative India-centric products at the most value-driven price points to customers across the country.

Speaking on the announcement, TCL India Country Manager Mr. Mike Chen, said, “As one of the biggest sports hubs in India, the Delhi/NCR region has a massive base of cricket fans devoted to Delhi Capitals. Our decision to partner with the T20 team, however, is influenced by more than just the end-consumer reach. Both TCL Electronics and Delhi Capitals have distinguished brand legacies and are known to be game-changers and pioneers in their respective domains. This mutual core synergy is why we have tied-up with Delhi Capitals as a team sponsor.”

“IPL is an India-centric intellectual property and is present across the country, while New Delhi is the country’s power centre as its Capital. Our association with Delhi Capitals and, by extension, IPL 2019 will help us to tap into India’s passion for cricket and deliver newer experiences to customers on a pan-India level,” added Mr. Chen.

Mr. Dhiraj Malhotra, CEO – Delhi Capitals said, “We are delighted that a top global brand such as TCL Electronics has come on board as the team sponsor for Delhi Capitals. As a team, we aspire to engage, delight, and entertain cricket fans across the country. The association with TCL will help us elevate that engagement to another level through novel cross-channel initiatives.”

During the two-month long tournament, TCL Electronics will also run an integrated brand campaign across multiple online and offline channels. As part of the campaign, the brand will also launch new products and categories to the Indian market, and promote its current offerings across various channels. This will include social media engagement, on-ground activations, strategic website banner placements, and a ‘Cheer for the Brand’ selfie contest, as well as a recognition of ‘Best Fan Moment’ in collaboration with Delhi Capitals.

TCL India Country Manager Mr. Mike Chen said, “Having emerged as a game-changer in the consumer electronics space, we will further leverage the mileage from this association to introduce new products and categories to TCL’s portfolio for the Indian market. We will be looking to further build on our India-first approach and bolster our emphasis on creating products ‘for the people, by the people, with the people’.”

A leading player in the global TV and consumer electronics segments, TCL Electronics has established itself as a frontrunner in the Indian market within a short time since its national launch. The brand has emerged as a clear consumer favourite across multiple categories, such as home entertainment, on the back of its advanced tech-led products and unmatched affordable pricing.

With its latest association, TCL Electronics is further consolidating its market position and driving heightened brand engagement through the medium of cricket – the most popular sports in India. TCL will also introduce special offers and campaigns in association with Delhi Capitals throughout the tournament to deliver novel experiences to all Indian cricket lovers.