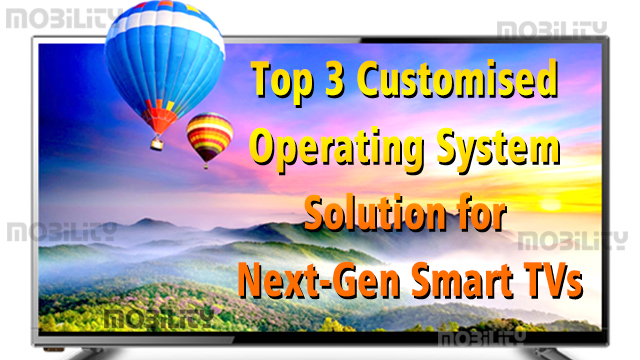 When buying a smart TV, there’s one question people often overlook: which smart TV operating system is best? When anyone says the word Android the first thing that comes to mind is Android-powered smartphones. But this isn’t 2012 any more smartphones are not the only devices powered by Android. The world of smart TVs has seen supremacy from the Android OS. As important is to choose the right panel, resolution and sound quality is to television, selecting the correct operating system have become equally important if not more.

Here are the Top 3 Operating System that you should consider while purchasing the Smart TV.

Cloud TV is a Legally Licenced, CERTIFIED Operating System for all Android based Smart TVs that comes with it’s a licensed App store featuring certified partnered apps, Content Discovery Engine & more that sets you free from hassle of embedding unlicensed software or apps; Allows for easy and minimal licensing procedure for quick go-to-market and to compete with confidence.The state-of-the-art CERTIFIED solution is compatible with all Android-based OEM/ODMs, TV manufacturers and Smart TV brands. It also has a unified launcher and  Built-in Alexa, categorically designed to deliver rich and immersive digital entertainment experiences. Designed to facilitate total control over UI/UX development, the Cloud TV OS offers end-to-end customization possibilities for all Android-based Smart TVs.

LG announced its TV operating system called WebOS. Despite it being so old, it is currently one of the best TV OS available. It comes with all the major video streaming service support. But the key highlight of the OS is its launcher bar that appears when the Home key is pressed on the remote. It grants access to all the apps and services to the users and comes with a wide range of pre-installed apps such as web browser, Live TV, TV guide and recordings.It also has a dedicated My Channels and My Content options where users can add their favourite shows and other contents for quick access. In addition to this, the OS is also certified for Dolby ATMOS and Dolby Vision.LG has also added voice control that comes in handy while searching for content. In a recent update, the company has also added ThinQ AI to the OS that can be used to communicate with supported devices. Alexa Skills and Google Home are also available.

Samsung Tizen OS for TVSamsung’s TV OS is based on their Tizen OS, which also powers their other range of home appliances. The idea behind this is creating an always-connected ecosystem where each device communicates with each other, including supported washing machines and refrigerators.Although Samsung’s Tizen OS features a similar-looking bottom launcher like LG WebOS, they have added a second row that shows some recommendations based on the app selected allowing users direct access to it right from the home screen.It also comes with voice command support which can be used while searching content.Samsung has also added SmartThings support allowing users to connect and control smart home devices such as lights and thermostat, etc.