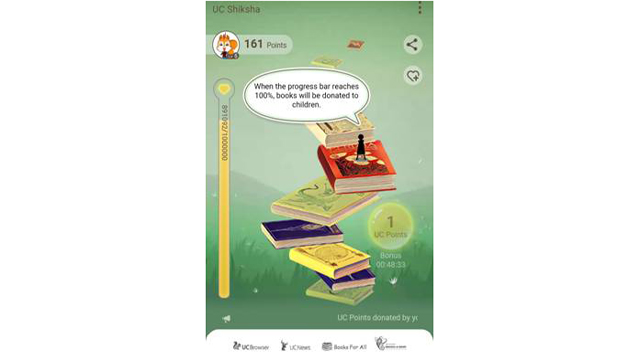 UCWeb, a business within Alibaba Digital Media and Entertainment Group, has launched UC Shiksha – Book for India’s future initiative, with an aim to contribute towards the education of children by donating books to the needy children in India. Patrika is the media partner to help bring in netizens into making it happen. In collaboration with two NGOs, the in-app campaign has finished its first phase in July and has donated 10 thousand books in 14 States in August. The second phase is in full swing.

In less than three weeks, 1 million UC Points had been gathered from about 100 thousand users

Utilizing the vast reach of UC Browser and UC News among mobile users in India, UCWeb converges readers’ power by collecting “UC points” which are derived from users’ time spending on the content on UC. On average, each reader spent 45 minutes on the browser during the first phase of the campaign. In less than three weeks, the campaign gathered 1 million UC points from about 100 thousand users. As a result, 10,000 books are donated and distributed by Books for all (http://booksforall.org.in/) and Donate-a-book (https://donateabook.org.in/) to 14 states: Andhra Pradesh, Karnataka, Kerala, Pondicherry, Tamil Nadu, Telangana, Uttar Pradesh, Rajasthan, Jharkhand, Maharashtra, Delhi, Haryana, Manipur and Uttarakhand. Children in these regions aged from 3 to 17 are able to enjoy different books of their age. They wrote thank you cards for the appreciation.

The Internet Plus Philanthropy Model” makes philanthropy easy for everyone

The campaign was launched under the new “Internet Plus Philanthropy Model”. The internet is not bound by time and space which makes philanthropy possible for everyone.  “Without proper knowledge, a child misses out the opportunities required to advance in life and to contribute to the good of the society. Education is a tool to bring a turnaround to the socio-economic conditions of most people in the country. UCWeb is the first mobile internet company to launch such charity innovation. With only a few clicks per day, you can help with the education of a child.” said Damon Xi, General Manager – India & Indonesia, UCWeb, Alibaba Digital Media and Entertainment Group.

Continuing the previous effort, the second phase of UC Shiksha has started in early August. It is expected to donate 5000 to 15000 books each month in accordance to the participation level of the readers. Under the help from the kindhearted users, UCWeb, together with Booksforall and Donate-a-book, will keep on making further donations in the future.