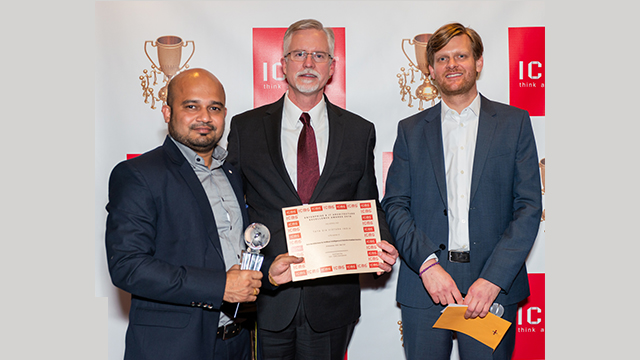 Winners of the coveted ICMG Global Architecture Excellence Awards are selected through an elaborate, stringent process of four rounds that requires showcase of technology expertise, deep domain understanding, overall vision for the industry and a case study presentation at Architecture World Summit.

Expressing his delight, Mr. Leslie Thng, Chief Executive Officer, Vistara, said, “We are happy to receive this recognition for an innovation that truly reflects Vistara’s steadfast focus on transforming the experience for air travellers.”

Mr. Ravinder Pal Singh, Chief Information & Innovation Officer, Vistara, said, “For us, Vistara’s robot is a remarkable ‘Make in India’ story, and for it to be recognized at a global platform against world leaders in technology, makes this award so special. At Vistara, we are very upbeat about leveraging AI and other technologies to drive innovation that would make air travel a truly seamless and joyful experience.”

In the last 12 years, ICMG Architecture Awards have become the most prestigious global award program honoring excellence in the Enterprise and IT Architecture, with the leading companies from over 30 countries participating every year.

Vistara’s robot was also recently awarded by ET NOW for ‘Excellence in Leveraging IT for Business Performance. As part of its futuristic technology framework, Vistara introduced the first-of-its-kind robot earlier this year and ushered in a novel innovation in the form of an indigenously built robot that assists travellers in the airline’s lounge at New Delhi’s Terminal 3, Indira Gandhi International Airport, addresses their queries and also entertains them. It is built on a chassis of four wheels, enabling it to rotate 360 degrees, and has three in-built cameras for cognitive interaction.

At present, the robot is equipped to perform functions such as scanning boarding passes, providing useful information about the terminal, departure gates, weather conditions of the destination city, real time flight status, play songs, games, etc. The robot’s capabilities are being enhanced and it is being upgraded to perform more complex tasks in the near future, to assist travellers in many more ways.