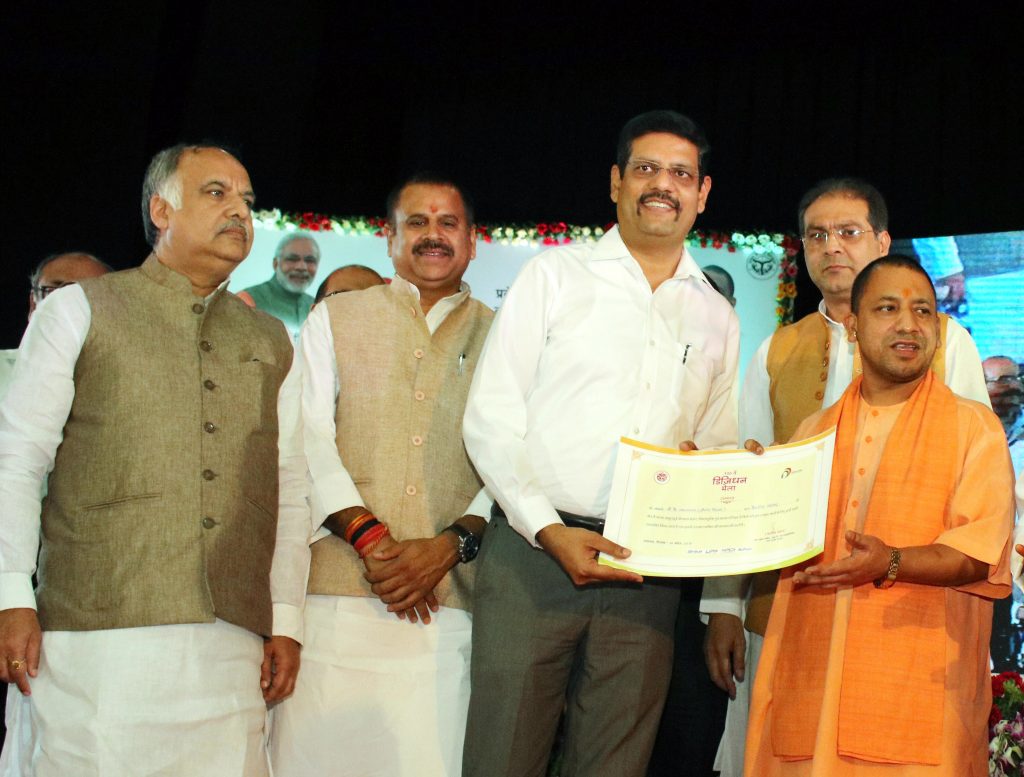 At a special function in Lucknow, Yogi Adityanath ji, Hon. Chief Minister, Uttar Pradesh, lauded Vodafone M-Pesa for turning Prime Minister Shri Narendra Modiji’s Adarsh Gram Yojana dream into reality, in the state. The Prime Minister had adopted Village Nagepur, near Varanasi, Uttar Pradesh East, to be transformed into an ideal village. Working on the PM’s dream, Vodafone M-Pesa connected with residents of the village, educating them and getting them to adopt M-Pesa digital wallet in place of traditional cash. Nagepur is now a less cash village! The Uttar Pradesh CM conferred the Excellence award on Vodafone M-Pesa, which was received by Nipun Sharma, Business Head- UP East, Vodafone India.

Part of Digital economy and cashless society, Vodafone M-Pesa has been closely working with Government to promote cashless transactions across India. Specifically in UP East, M-Pesa had conducted a 50 day cashless drive, covering 47 districts in the state, interacting with citizens and building awareness on the benefits and ease of using mobile wallets. Vodafone M-Pesa team held  demonstrations for villagers on using Vodafone M-Pesa even on ordinary feature phones for daily small transactions such as paying for their cutting chai, snacks, groceries, taxi/auto fares, and much more. A similar focused camp was conducted in Nagepur.

Acknowledging the work done by Vodafone M-Pesa for the citizens of Uttar Pradesh, Honourable Chief Minister of Uttar Pradesh Yogi Adityanath ji said “The challenges of taking the Digital India and cashless message into the deepest pockets of a state with the highest demographic statistics like Uttar Pradesh, are manifold. Our Honourable Prime Minister has taken a long term view to bringing villages up to speed with the larger National objectives, through the Adarsh Gram Yojana. We are happy to see that his pet project of turning Nagepur in to an ideal village, has been fructified through the efforts of team such as Vodafone M-Pesa connecting with each household in the village and hand holding them to achieve cashless living”.

Post receiving the award from the Hon’ble CM, Nipun Sharma, Business Head – UP East, Vodafone India said, “Vodafone M-Pesa is privileged to partner the Government’s bold step to accelerate India’s progress into a less cash economy. Our teams have been on the road, covering multiple districts of UP East, traversing through villages, engaging closely with villagers, providing live demonstrations on how Vodafone M-Pesa can hugely simplify lives in today’s scenario. We are specially proud to have successfully turned our Prime Minister’s Shri Narendra Modi Ji’s dream project into reality, by transforming Nagepur into an Adarsh Gram ‘Cashless village”.

Vodafone M-Pesa is an innovative, safe and secure mobile wallet which enables complete suite of services like money transfer, bill payments, and recharge on the move from the mobile. It caters to all segments of the society, from the unbanked to the under banked and to the net-savvy and evolved customers. Today, with a pan-India distribution of over 130,000 agents and more than 4.5 million customers, Vodafone M-Pesa is the largest banking correspondent in the country and is playing a vital role in enabling financial inclusion and m-commerce.