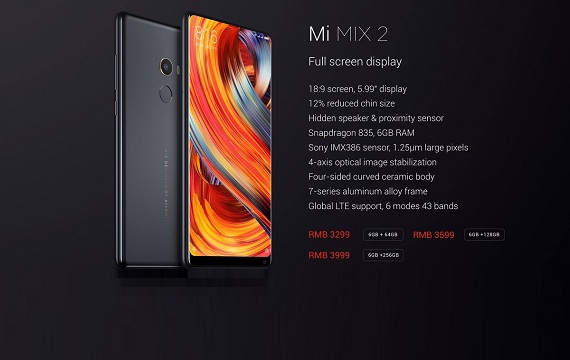 Global technology leader Xiaomi announced Mi MIX 2, a gorgeous evolution of Mi MIX, the revolutionary concept phone unveiled a year ago. In addition to raising the bar for its innovative MIX series, Xiaomi also upped the ante in two other product lines — it announced Mi Note 3, which sports a dual-camera setup and a 16-megapixel front camera, and upgraded its line of laptops with the new Mi Notebook Pro.

Mi MIX 2 once again underscores Xiaomi’s commitment to being at the forefront of technological innovation while making these innovations affordable to the widest possible range of consumers. Starting from RMB 3299, Mi MIX 2 will be available in China from 15 September onwards and will make its way to selected global markets at a later date.

Mi MIX 2 builds on the foundation of the original concept. It is now 11.9% smaller than Mi MIX, and has a 5.99-inch screen with a 18:9 full screen display, which delivers a stunning appearance with the screen almost entirely filling up the front surface.

Instead of the piezoelectric speaker solution in Mi MIX, the second-generation uses a hidden speaker that only takes up a thin sliver of space between the top edge of the phone and the screen. At the same time, the front camera remains at the chin and Mi MIX 2 continues using the ultrasonic proximity sensor. This allows the device itself with all the components to fade into the background, while the focus is entirely on the screen.