About 50% of India Smartphone Users Planning to Buy New Device Within a Year as 5G Transition Gathers Pace: Survey 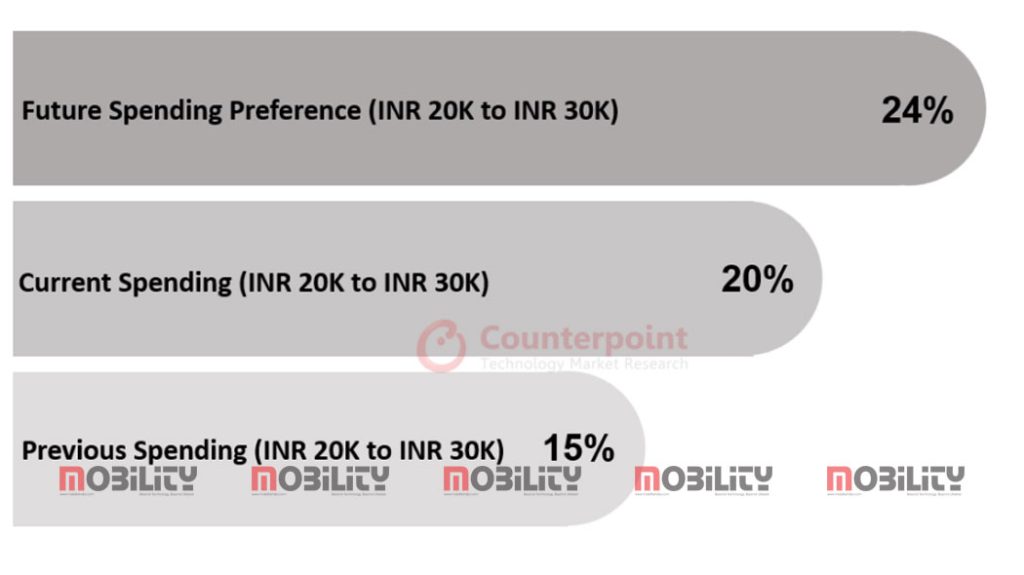 About half of India’s smartphone owners plan to purchase their next smartphone within a year, Further, India’s smartphone market ASP (average selling price) is expected to rise because consumers tend to prefer a higher price band for every subsequent purchase. Also, Samsung, Apple and OnePlus are at the top as the survey respondents’ preferred smartphone brands for the next purchase. In terms of features, 5G capability is the third most important feature considered when planning the next purchase. The same factor is ranked tenth in terms of importance for current smartphone purchases.

The objective of the study was to understand the changing consumer trends and choices across past holding, current ownership and future preference for smartphones. Based on the respondents’ previous smartphone ownership, the INR 10,000-INR 15,000 price band was the sweet spot. For the current smartphone ownership, the sweet spot shifted up to the INR 15,000-INR 20,000 band. And for the respondents’ future smartphone purchases, the price band shifted further up to INR 20,000-INR 30,000.

Research Analyst Arushi Chawla said, “Smartphones are now an important part of our lives. As a result, smartphone users try to upgrade their devices with every next purchase. When purchasing a new smartphone, more than one-third of the users plan to retain their current device as an alternative/secondary phone. Also, with more exchange offers available, more than one-fourth of the respondents plan to trade in their current smartphone when purchasing the next one. Therefore, users feel comfortable buying a smartphone from a higher price band for a better experience and updated features.”

Chawla added, “Samsung has a strong grip over the Indian smartphone installed base. It has a widespread distribution network and launches new models around the year across most price brands. All these factors have helped Samsung develop and maintain its brand value. Therefore, in the survey, Samsung maintained its top position both in terms of past ownership and current ownership and also for future preference. Samsung is followed by Apple and OnePlus as the most preferred future preference smartphone brands. The top reasons for preferring a brand are reputation, advanced features and user interface. As a result of these factors and the aspiration to move to a higher price band when purchasing a smartphone, users tend to prefer premium smartphone brands. In addition, 5G capability becomes more important as we move up the ladder for budget preference for future smartphones. 5G is one of the main factors taken into consideration for all major smartphone brands. But 5G is the most important factor for respondents preferring Apple as their next smartphone purchase.”