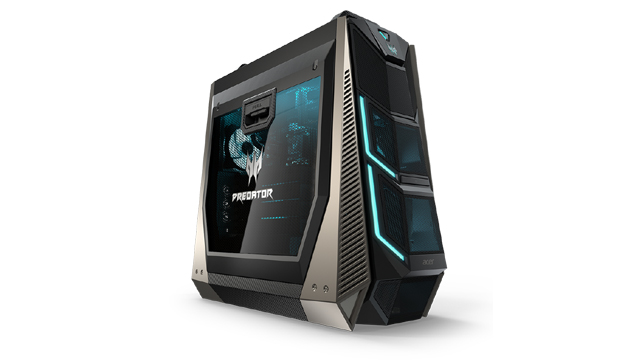 Commenting on the launch, Mr. Chandrahas Panigrahi, CMO and Consumer Business Head, Acer India, said, “We are thrilled to welcome to our gaming arsenal the iconic Predator Orion 9000 gaming desktop. The Orion 9000 is a desktop of extreme power designed especially for the demanding professional gamer with advanced cooling and game ready features to easily take on any game out there. Acer has the widest portfolio of gaming PCs in India with products catering to budding gamers to professionals. With the launch of this, we have moved a step closer to our commitment of delivering the best gaming products for gamers at every level”

The Predator Orion 9000 will offer up to a cutting-edge Intel® Core™ i9 Extreme Edition and can accommodate up to 128 GB DDR4 memory, allowing it to handle compute-intensive tasks with ease while providing exceptional performance. One-punch overclocking enables battlers to select turbo performance with a single press of a button. Equipped with the futuristic Intel Optane memory Orion 9000 delivers blistering read and write speeds and a massive 2TB hard disk

Designed to intimidate enemies and inspire game play, the commanding aesthetics of the Predator Orion 9000 series feature a black-and-silver spacecraft-like exterior with customizable RGB lighting along the sides of the front bezel. Its massive side window panel highlights the striking and powerful interior with a design that keeps electromagnetic interference (EMI) levels in check despite the size of the opening. Optional fans with customizable RGB lighting creates a virtual light show for an even more arresting appearance. Outfitted with two handles and wheels covered with a carbon fiber pattern, the new rigs can be easily moved from one location to another.

Stay Cool In The Heat Of Battle

The Predator Orion 9000 series feature liquid cooling and Acer’s IceTunnel 2.0 to keep the temperature down while the game heats up. IceTunnel 2.0 is an advanced airflow management solution that cleverly separates the system into several thermal zones, each with an individual airflow tunnel to expel heat. Huge metal mesh panels on the front and top allow more cold air in and the rising hot air of the liquid-cooled CPU out, while up to five 120 mm fans in the front, top, and back channel cool air through the chassis. Part of the airflow is redirected towards the back of the motherboard tray to cool the storage devices. The graphic cards feature blower-style fans to drive the heat out from the back, while the PSU is self-contained to avoid thermal interference.

On the connectivity front, the desktop includes two USB 3.1 Gen 2 ports (one Type-C and one Type-A), eight USB 3.1 Gen 1 ports (one Type-C and seven Type-A) and two USB 2.0 ports (Type-A). The Predator Orion 9000 overall supports three M.2 slots to extend the ability to increase the speed, power and capabilities of the PC, and four PCIe x16 slots provide ample expansion for video cards.

Starting at Rs. 319999/- the products will be available at select Croma stores and Acer Exclusive stores.