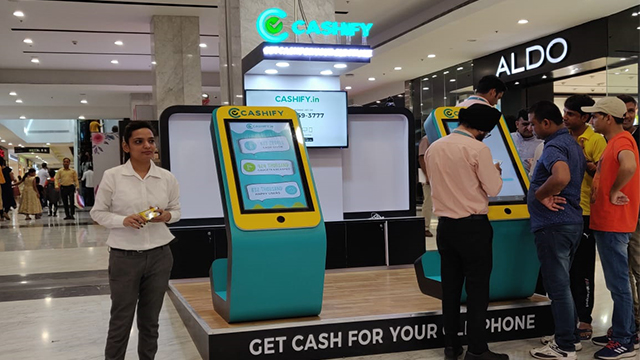 After dominating the online space, Cashify is looking forward to a expand it’s offline reach
aggressively in the Indian market through kiosks, pop-up shops and exclusive stores. The brand is currently having 25 offline kiosks/pop-up stores, across 8 cities in India.

Cashify has already announced their plan to invest 20 Crore in India to expand the offline
presence across 20 cities in India, with 75 offline kiosks/Pop-up shops, by the end of 2019. Major cost will go in establishing kiosks and offline stores for people to sell their old smartphones on the spot and get instant money. The brand has also plans to introduce exclusive Cashify stores in India, the first one to be launched in June 2019 in Faridabad, Haryana.

Being the first brand in Re-commerce ecosystem in India to start offline kiosk model, Cashify is now looking to expand its offline presence aggressively across different geographies. The brand operates it’s own chain of kiosks in Delhi, Gurgaon, Noida, Ghaziabad, Mumbai and Bengaluru as of now. It is also the first brand to introduce the concept of offline kiosks to help customers sell their used phone instantly. Cashify opened their first kiosk in January 2018 and has expanded to Delhi NCR, initially.

Cashify is already offering free pickup services to customers to sell their phone in 40 cities, which has been majorly contributing to its success in India. The brand also has been the exclusive buyback and upgrade partners for leading smartphone brands like Apple, Xiaomi, Vivo, Nokia, OnePlus etc. Cashify is also looking forward to launch their own brand of accessories for smartphones and the e-commerce portal for that is expected to go live by first week of July
2019.

Mr. Aseem Goyal, VP – Retail Expansion, Cashify said on the launch; “We are glad to announce 2 pop-up stores in Chandigarh, as we are looking forward to make a strong presence in the offline market across north part of India. We wanted to ensure that the service should be available easily to customers in the form of kiosks at key city points. Retail channel is also being

used to communicate the importance of selling old handsets lying unused with customer and we have seen improvement in adoption of our services for that. Apart from expanding our own chain of kiosks and pop-up stores we are also looking forward to partner offline retail partners in the coming months to expand our offline reach to more geographies.”

Usually, selling your old handset means that you’ll have to put out an advertisement, negotiatewith potential buyers, and even end up selling your old phone at price way less than expected.Cashify streamlines the entire process and offers a transparent, upfront quote, and doorstep pick-up service. Cashify offers a fair deal for old phone based on the brand and present condition, where the parameters are completely objective. This also means the amount that a customer is entitled to receive is based on the phone itself and its current market value.