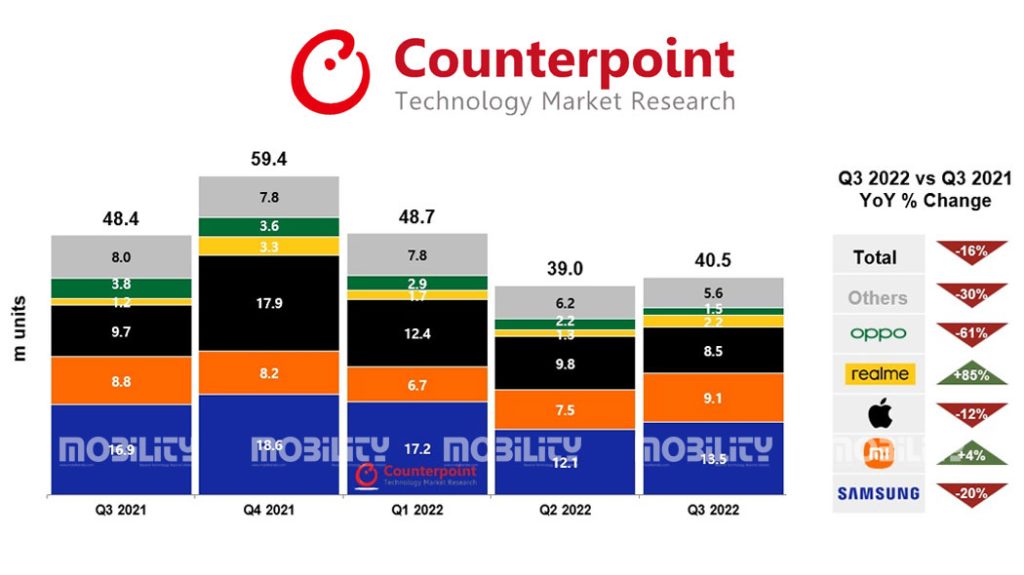 The European smartphone market continued to suffer from a deteriorating economic climate and ongoing geopolitical uncertainty with shipments declining by 16% year-on-year in Q3 2022. However, Apple’s iPhone 14 launch and a significant push by Xiaomi and realme in Russia helped shipments to grow by 4% compared to Q2 2022.

Counterpoint Research’s Associate Director, Jan Stryjak said, “The overall climate is still bleak in Europe. Weaker consumer demand for expensive devices, exacerbated by China lockdown-related supply issues, meant Apple’s iPhone 14 launch was not as strong as expected, helping Samsung remain on the top spot. There was good news for some vendors though. Xiaomi and realme’s shipments in Eastern Europe increased significantly as they both looked to capitalise on the continued official absence of Apple and Samsung from the Russian market. This growth helped Xiaomi overtake Apple as the Europe’s second smartphone OEM, while realme became the region’s fourth largest smartphone OEM for the first time ever aided by a very difficult quarter for OPPO.”

Commenting on the outlook for the rest of the year, Stryjak added, “With the full force of the latest iPhone launch being felt in Q4, further improvements in the coming quarter are likely. However, expectations of a tough winter will constrain consumer demand, and with some OEMs facing the challenge of excess inventory, shipments are unlikely to reach last year’s levels, let alone pre-pandemic.”