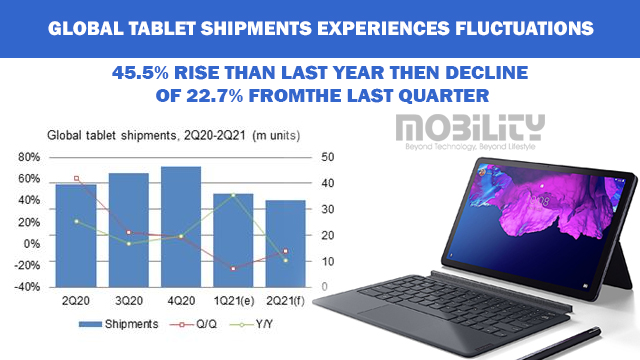 According to Digitimes Report, the global tablet shipments has witnessed an increase in 35.96 million units, which was more than 45.5% from last year but less by 22.7% from the last quarter.

The chip shortage had little impact on the tablet market, which continued to be seasonal. Most of the tablet manufacturers had escalated their production and shipments in 2020 in order to cater to the increase in demand for tablets.

Owing to the pandemic and ensuing disruption forced people to stay indoors. This has increased their dependency to rely on devices like laptops and tablets for not just work from home (WFH) and online education, but also content consumption.

This phenomenal growth has not been seen since 2013. This year there has been arise of Chromebooks also. Chromebook shipments totalled 13 million units in 1Q21, up from 2.8 million in the first quarter of 2020.

“However, as buyers increasingly turn towards competing products, such as thin and light notebooks for work or entertainment and Chromebooks for education, the future of tablets will remain under constant competition, “ says said Anuroopa Nataraj, research analyst with IDC’s Mobility and Consumer Device Trackers.

According to statistics, shipments are expected, however, to decrease in the coming years with the number set to reach just 44 million units by 2020.

Apple is the leading tablet vendor, holding a share of 28.8 percent of global tablet shipments in the first quarter of 2018. The company has nevertheless seen its market share in the tablet market decline in recent years. This has coincided with the rise of Samsung, whose tablets run on Android, which has seen its market share rise from 7.3 percent in the last quarter of 2012 to 16.7 percent in the first quarter of 2018. Overall Samsung shipped just 5.3 million units of tablets in that quarter, in comparison to the 9.1 million shipped by Apple, which generated the company revenue of almost 4.1 billion U.S. dollars.

Since we all are glued to devices be it laptops, phones, tablets, gaming consoles. This is primarily because we are connected to our friends family etc through these devices. Hence, they are high demand over the past year, and it’s been a big win for the semiconductor industry that produces the tiny chips that power all those devices.

However, with the shortage of chips over the past few months, there has been a sudden sluggishness in the supply chains. The limited chip availability has led to a decrease in the tablets, PCs, smartphone etc. This sudden shortage has reflected in the shipment of the laptops, chrome books, PCs, smartphones etc.

However, this chip crunch is likely to continue for some years now. But how can the manufacturers cater to the customers during this shortage? The demand for PC devices will be fuelled by the digital transformation and the growing need for e- learning and work from home options.