PICK THE PERFECT GIFT FOR RAKHI 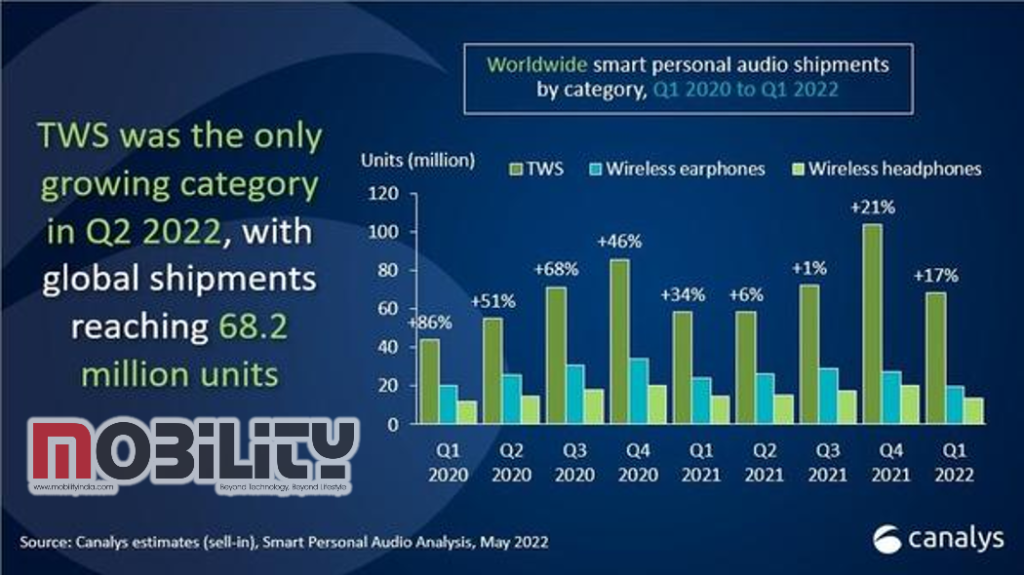 Global TWS (true wireless stereo) shipments grew 17%in Q1 2022 to reach 68.2 million units. Apple, Samsung and Xiaomi retained their top three positions from the previous quarter, but only Apple grew shipments. Among the top five TWS vendors, Skullcandy and Edifier, both audio players, gained market share while the top three lost it. Since Q3 2021, TWS remains the only growing category, leading to the overall 4% growth in the worldwide smart personal audio market.

Market leader Apple’s TWS shipments were up 14%. Apple’s AirPods line grew 3% to reach 19.3 million units, while Beats by Dre, Apple’s audio sub-brand, contributed more significant growth, increasing 553% to reach 2.4 million units. Beats’ strong performance was driven by the popularity of its Studio Buds and the recently launched Fit Pro. “Vendors are using audio names with strong brand equity in sound to expand their total addressable markets,” said Jason Low, Canalys Principal Analyst. “Unlike Apple’s AirPods and Samsung’s Galaxy Buds ranges, devices from sub-brands can depart from the vendors’ core design philosophy and develop their own unique styles and niches. Options for variety and personalization are vital in a market where design and feature homogenization are common.” Samsung saw a similar trend, as its Galaxy Buds TWS line fell 13%, while shipments from its Harman subsidiary, JBL, grew 31%.

Canalys estimates show that the average selling price (ASP) of the top five TWS vendors fell to US$144 in Q1 2022, from US$153 in Q1 2021. “Players such as Skullcandy, Edifier and JBL attained greater scale after doubling down on the sub-US$50 segment, contributing to the ASP decline,” said Canalys Research Analyst Sherry Jin. “But highly commoditized items, such as budget TWS devices, are likely to bear the brunt of rising costs and inflation. The uncertain global market outlook will hamper consumer confidence and weaken demand. On top of waning demand, a crowded entry-level segment, rising costs and supply constraints also add to vendors’ problems.”

“Lower prices and value-for-money devices will not immediately translate to better market performances,” said Low. “Vendors must now explore niches, such as TWS for mobile gaming, work and fitness use cases. These are key areas where vendors can create new sub-categories that only a few brands can own and make an impression in a crowded market. This strategy will bode well for the post-pandemic world, where users will continue extending their listening habits into their daily lives and hybrid working environments.”

PICK THE PERFECT GIFT FOR RAKHI