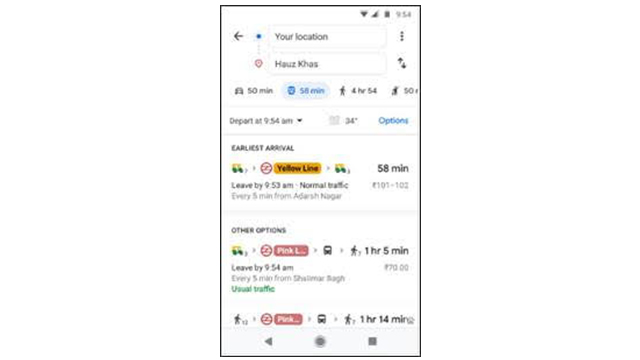 Announcing the new India-first features, Taylah Hasaballah, Product Manager, Google Maps said; “Google Maps is being used by over a billion travellers to navigate and explore their world, wherever they are. And we at Google are focused on building Maps features that will help deliver a more relevant, accurate, and reliable experience for commuters. Transit navigation is one of the most popular Maps features in India, and we look forward to these new features will bring more value to users.”

How will these three new features help commuters?

To see this feature, simply enter your starting location and destination, then tap the transit tab. The results for bus travel times from live traffic will include the time in green (when running on time) or red (when delayed.)

Real-time train information for long-distance trains
Google Maps can now help users know when their train is going to arrive by indicating the real-time live running status. Search for your starting location and destination, or your starting station and destination to see a list of trains that you can take between the routes. From there, you can easily see the real-time status, and whether any of them are delayed, right inside Google Maps. This feature was developed in partnership with the Where is My Train app that Google acquired last year.

Mixed-mode directions results that include auto-rickshaws
The public transport tab on Google Maps for Android will now tell users when taking a journey that combines auto-rickshaw and public transport is a good option. It will also indicate how much time it will take, and which station they should take an auto-rickshaw to/from. They can also see the rickshaw meter estimate, and departure times for their transit connection. This feature will be available for Delhi and Bangalore initially before rolling out to more cities later.

Google Transit is a feature of Google Maps designed to help users plan public transport trips quickly and easily. It is now available for hundreds of cities across dozens of countries, with new partners joining all the time. Google continues to work with public transport services in other cities to enable real-time transit information for their services and will announce these, as and when they become available.