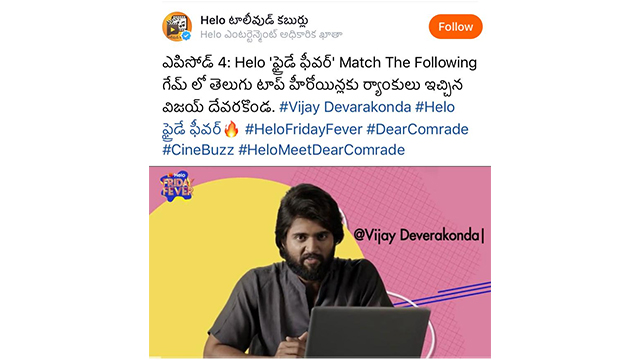 ‘Friday Fever’ is a one-of-a-kind online show that aims to bring fans closer to their favourite movie stars by providing actors from movies across 14 major Indian languages with a platform to share their excitement and expectations from the upcoming release.

The show, which rides on the Friday jitters of the movie stars right before the movie release, follows a series of fun question and answer format. Exclusively designed for Helo, the show hosted its first episode on Friday, 19th July with Vijay Deverakonda & will be hosting the next episode with Rashmika Mandaara on 26th July, the lead pair of the upcoming multilingual movie ‘Dear Comrade’ as a part of their promotional collaboration.

“We are delighted to announce the launch of ‘Friday Fever’, our one-of-a-kind online show that provides movie fans across 14 major Indian language communities to talk about the upcoming blockbusters and touch upon the lighter moments and experiences of the actors while shooting for it. Entertainment is one of the biggest categories on Helo and the launch of the show is aligned with our mission to offer our users the content that they like in their language and bring them close to their favourite movie stars.”

Themed in ‘Back to School’ style, the show revolves around the anxious cast waiting for their movie release on Fridays and puts them in a make-believe exam hall, answering question papers. The ‘fever’ represents the fun, tension pangs and aha-moments, as they take the challenge to answer the questions and share interesting behind the scenes stories with their fans. Every Friday, Helo users can catch country’s biggest stars sharing their excitement about the upcoming blockbusters and more.

‘Friday Fever’ has the celebs answering a question paper comprising five fun sections- Explain the following, Fill in the blanks, True or False, Match the following and Complete the following. Each of the two-minute segments requires the movie star to answer the questions in brief or elaborately. While ‘Explain the following’ section asks the stars about the film trailer, trolls that followed and shooting experiences, the ‘Fill in the blanks’ segment is all about movie trivia. On the other hand, the ‘True or false’ segment is loaded with gossip, rumours and myths from the tinsel town, ‘Match the following’ seeks matching of names of actors with rankings and ‘Complete the following’ catches the cast off-guard in dealing controversies from the industry.

Helo, the leading Indian social media app, enables users to discover, post and share content in 14 regional languages. Meant for global desis, it aims to connect Indian communities from all over the world, in the language they are most comfortable with. Check out ‘Friday Fever’ and get all caught up with the most exciting upcoming movies and your favourite stars, brought to you exclusively by Helo. The first episode has already set the ball rolling.