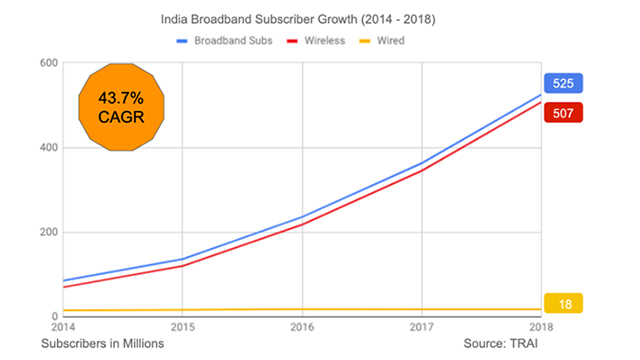 Despite of the data big-bang, which was triggered after the entry of Jio in to the market-place, 2018, has been among the lowest growth years for broadband subscribers in India.

As per the TRAI data analysed, 2018, saw a growth of 44.7% in broadband subscribers over the previous year. This is the lowest in the past 5 years (2014 onwards), since a lot of industry and government focus started towards increasing the broadband penetration in the country.

Interestingly, India witnessed the maximum addition in broadband subscribers in the year 2016, when Jio started its services commercially on September 5th. In 2016, 73% of subscribers growth was seen over the previous year. In 2017, the yearly growth was 54% which is estimated to settle at 45% in 2018.

“This decline is evident…,” said Faisal Kawoosa, Founder techARC, “… as it is getting difficult to add the new broadband subscribers at the entry segments of users. It would be a herculean task to get next 500 million on board taking the Indian broadband subscribers to cross 1 billion mark.”