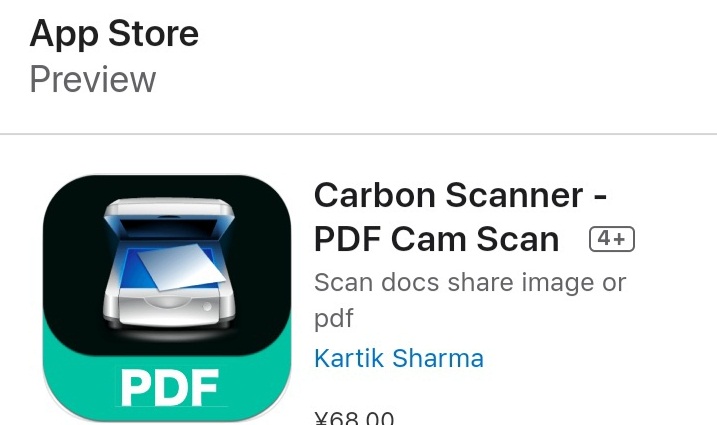 Indian mobile app studio KShark Apps has recently launched the iOS version of its app Carbon Scanner. Carbon Scanner which was launched for Indian Android Users in July grew to 100,000 downloads within a week of its launch and now have almost 400,000 users. Now with the iOS Version, KShark Apps wants to serve Indian iOS users as well.

KShark Apps is a brainchild of Indian Entrepreneur Kartik Sharma who left his corporate job to start and grow an India based Mobile App Studio. Since officially starting its operations in 2017, the mobile studio has grown to receive 12 million downloads for its various applications. Their recent android version of Carbon Scanner is getting 15k downloads every day on google play store.

The iOS version of Carbon Scanner is just as secure as the Android one and uses the iCloud drive to make backups for the scanned documents. Since all the data of the user is backed up on their own device or iCloud, the data can easily be transferred if the user changes or upgrades to a new iPhone. KShark Apps is also taking help from some IT security researchers to make Carbon Scanner even more secure for its users. Differing from their Chinese counterpart ‘CamScanner’, Carbon Scanner doesn’t store any user data on its servers and hence has no security concerns, thus providing a more secure and robust solution to the Indian and global users. The iOS version of Carbon Scanner is totally free with ads and comes with an optional premium upgrade to unlock more business features such as signature and OCR for converting photos to digital text.

Both iOS and android versions of ‘Carbon Scanner’ by default supports 6 filters to enhance the quality of the scanned documents. The filters like Grayscale, BW1 and BW2 are perfect if you are looking to scan an official document. The special filter called Magic filter pops out handwritten notes and makes them eligible for sharing. Carbon Scanner also has brightness, sharpness and contrast modulation so the user can get perfect document quality with just a few clicks.

Kartik Sharma, CEO and Founder of KShark Apps, the company behind Carbon Scanner claims their app is 10 times more secure than ‘CamScanner’ because of the way it’s developed. ‘Carbon Scanner enables Cloud Sync using iCloud so users have complete control of where their data is stored and how it’s accessed’ mentions Kartik.

“We are very happy and delighted to launch the iOS version of our app Carbon Scanner. Since the launch of our Android version, we have received tremendous support from Indian audience, and with our iOS version release, even iPhone users can easily access this app. Our app is second to none when it comes to scanning and text recognition. We believe we can compete with major global players and establish ourselves as a go-to document scanner app in the Global Market. We believe in #VocalForLocal and are building Carbon Scanner with the aim of #LocalToGlobal” said Kartik Sharma, CEO & Co-Founder of KShark Apps.