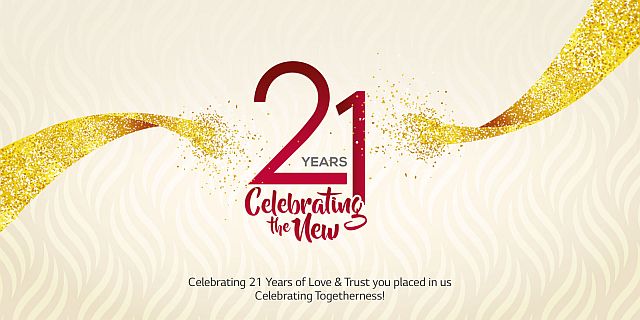 LG Electronics India launched an emotional yet inspirational campaign themed #CelebratingTheNew, revolving around how new innovations and new lifestyle aspirations make dreams come true, and more importantly how dreaming up is shaping a new India in 2018.

The launch of the video coincides with LG’s 21st anniversary celebrations in India, where it is further stepping up efforts to design and manufacture innovative products and solutions that satisfy the specific requirements of Indian customers.

The heartwarming video is of a father and a teenage daughter wherein a father surpasses a challenge he had since his youth, through learning from her daughter.

‘Celebrating the new’ is a fresh take on every lifestyle dynamics of parent-kid relationships in India. And, how one common thing in our lives passes from generation to generation. LG has captured this philosophy as journey of “Innovation” from one generation to another in the Video.

The video begins with a teenage girl searching for something in the old boxes where she accidentally discovers a mathematics answer sheet with a score that reads 3 out of 100 marks. The answer sheet, as it turns out, belonged to her father. “Were your math so bad?” the daughter asks her father.

The video takes you into a flash back where we see a boy was being scolded by his father, who also happens to be a mathematics school teacher, for scoring bad in his math exam. The 14-year boy, who is now a father, is embarrassed and is seen roaming around the streets. The scene cuts back to the present day where he regrets running away from school after flunking the test, and how that incident has changed his life forever.

As the story moves on, we see the daughter putting her best efforts in teaching math to his father to an extent that she convinces him to appear for an exam. The girl then sends the answer sheet to her grandfather to check. In the end, we see a surprise planned for the father where the grandfather is holding his answer sheet wherein a score of 93/100 is seen.

The music that accompanies the video depicts the journey and the motive of persuading one’s dreams.

Speaking of the campaign, Amit Gujral, Head Corporate Marketing, LG Electronics India, said: The emotionally charged campaign is a true reflection of LG’s brand philosophy of making our customers’ dreams come true. The video effectively depicts the emotions and aspirations of a common man, and how following one’s dreams can have a long-lasting impact on their own lives and of their loved ones.

“It reminds us in a unique way how dreams have and continue to come alive with LG. We have always been a companion along the journey of our consumers and this campaign dedicates a strong message – LG has been an integral part of every Indian’s dream.”

The video recalls LG’s astronaut brand that was launched coinciding with its 20th anniversary celebrations last year. The video, which went viral with 104 million views, a delightful message that touched the hearts of millions of customers. We invite all Indians to be a part of the new journey via http://bit.ly/LG21yrs_P where we are sure everyone of us shall relate to.

“Our 21 years long journey in India is a remarkable milestone, and we are determined more than ever before to develop innovative products and solutions that act as catalyst in offering better lifestyle to all its consumers,” concluded Mr. Gujral.