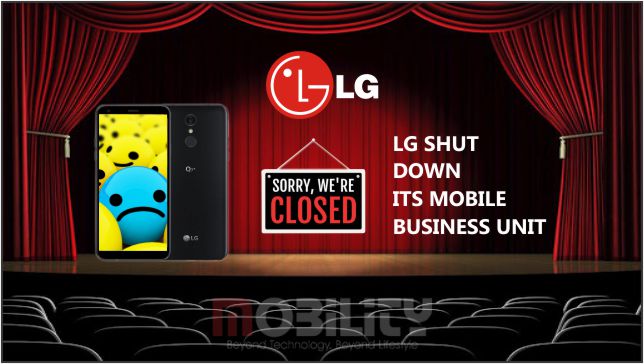 LG to Shut Down its Mobile Business Unit

LG, a world leader in smartphone manufacturers is said to be quitting the smartphone business. According to a statement by the South Korean company, it was evident that the decision to shutter its loss-making mobile division will enable it to focus on resources in growth areas. These growth areas for LG include electric vehicle components, connected devices, smart home products, robotics, artificial intelligence, and business-to-business solutions among other products and services. This decision comes days after LG showcased its ambitious rollable phone at the CES 2021.

The decision to exit the mobile phone business will allow the company to focus on areas such as electric vehicle components, artificial intelligence, connected devices, smart homes, business-to-business solutions.

The officials also added that it would continue to sell phones to clear its inventory. The company will also provide service support and software updates for customers for a certain period. According to LG, the mobile phone business wind-down is likely to be completed by July 31. It added that the inventory of some of its existing models may still be available after that date.

Moving forward, LG will continue to leverage its mobile expertise and develop mobility-related technologies such as 6G to help further strengthen competitiveness in other business areas. Core technologies developed during the two decades of LG’s mobile business operations will also be retained and applied to existing and future products. The company also contemplated several options, including selling the unit. Google, Facebook, Volkswagen, and Vietnam’s Bean Group were all companies LG Electronics was in talks, but evidently, none of them worked out.

LG’s exit is also not surprising as its smartphone business suffered losses since the second quarter of 2015 and has continued to do so for 23 consecutive quarters. It had accumulated up to 5 trillion won ($4.4 billion) as of the fourth quarter last year. According to a Counterpoint Research report, LG’s smartphone shipments were only 6.5 million units, and its global share stood at only 2% in Q3 2020.

For about six years, LG’s smartphone business has been in shambles, even though the company left no stone unturned in fighting back its rival Samsung and Chinese players with genuinely good phones, such as the Velvet. It was only six years back when the mobile phone business of LG made some profit.

LG even showed off its first rollable phone earlier this year, something that was meant to counter the foldable phones from the likes of Samsung and Motorola. It went ahead to confirm this phone would hit the markets later this year.