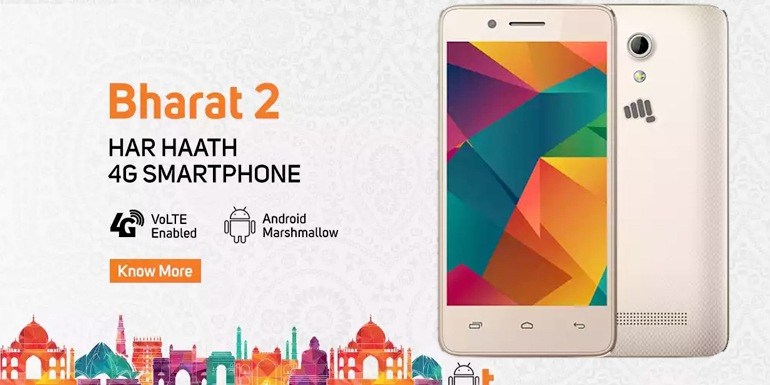 With a combined vision of accelerating the growth of data adoption, Vodafone and Micromax will work collaboratively to introduce the best consumer mobile experience. The smartphone ‘Bharat2 Ultra’ is a new smartphone under Micromax’s successful 4G smartphone ‘Bharat series’ that aims to bring better camera, battery and display options for the new smartphone users in the most affordable category.

Under this partnership, the existing and new Vodafone customers will have to buy Micromax Bharat-2 Ultra smartphone priced at Rs.2,899/- and will have to simply do a recharge of at least Rs 150/- per month for 36 months.(The recharges can be of any denomination totaling to a minimum of Rs. 150/- per month.) At the end of 18 months, users will receive a cash back of Rs. 900/- and after another 18 months, a cash back of Rs. 1,000/- respectively, in their Vodafone M-Pesa wallets, enabling them to transact digitally or withdraw cash, as per their convenience.

Commented Mr. Rahul Sharma, Co-founder, Micromax, “The Bharat-Series, has been aimed for acquisition of the first generation smartphone users. This partnership with Vodafone will help bring in the next phase of smartphone adoption by hand-holding consumers to upgrade them from feature phones to smartphones. We believe that greater device affordability and low cost data packs will drive increased smartphone adoption, as there is still a huge gap. At Micromax we want to give superior device experience in an affordable way and Bharat range is a testimony of the same, having already sold morethan 2 million handsets.”

Speaking about this offer, Avneesh Khosla, Associate Director – Consumer Business, Vodafone India said, “We are delighted to partner with Micromax to democratize the 4G smart phones at a never before price of under Rs.999/-This will help fulfill the aspirations of several million phone users across the country who desire a smart phone but couldn’t afford one. It will also encourage current non users of 4G to upgrade and enjoy a richer userexperience with Vodafone SuperNet 4G.”