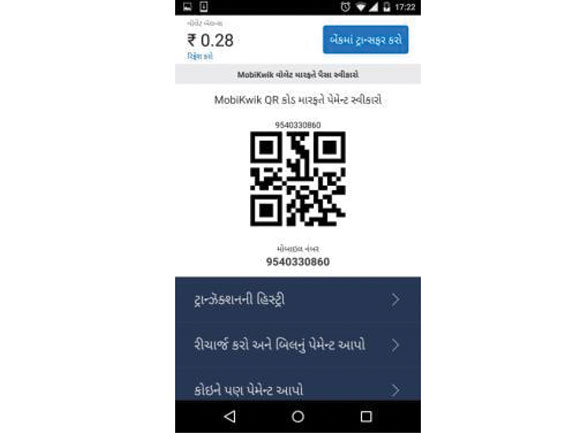 Indian mobile wallet major, MobiKwik, today launched a language version of its mobile app to help about 59 million Gujarati speaking population transact via their hand held devices. The Gujarati version would be based on a lighter variant ‘MobiKwik LITE’ of the app and can be downloaded with standard mobile internet connections by giving just one missed call.

Speaking about the launch, MobiKwik Co-Founder, Upasana Taku said, “Majority of Indians are not fluent in English and prefer to converse in their local languages. Given this fact, we announced the launch of MobiKwik app in regional languages. We had launched Hindi last month and Gujarati is the second languages addition to the app.”

“The November 8 disruption by the Prime Minister of India has pushed many into digital transactions. Our endeavour is to help people embrace the change in their own language.”, Upasana said.

Even as Gujarat ranks 8th on the list of e-commerce users, consumers in the state are witnessing a growing penetration of mobile based transactions. Cities like Ahmedabad, Vadodara and Surat are fast adapting to digital transactions with Ahmedabad alone accounting for more than 20% per cent of the total transactions on MobiKwik from the state.

Mobile wallet transactions are estimated to leapfrog from Rs 5,500 crore in 2015-16 to Rs 30,000 crore in 2022. From However, currently, only 20% bank customers depend on digital transaction while 75% still go the traditional banking way.

With a local language speaking population of 127 million, regional language users will dominate the future growth of internet user base in India. Being an under 1 mb app that works smoothly on EDGE connections, MobiKwik ‘LITE’ is addressing the underserved smartphone users in India, who face challenges of slow data connectivity and thus are unable to access digital payments easily. Users can download this app with just one missed call and sign up with their mobile number only, no email id required.

In times of note ban paralysing payments for the country, MobiKwik has taken many initiatives to ease the common man’s life. Since, the announcement of demonetisation that saw old Rs 500 and Rs 1,000 notes cease to be legal tender, MobiKwik has registered 18-fold growth in transactions. MobiKwik has also partnered with Amul which will help in making cashless payments with MobiKwik at 7000 Amul outlets and 3 lac Amul Multi brand outlets & retailers across India.