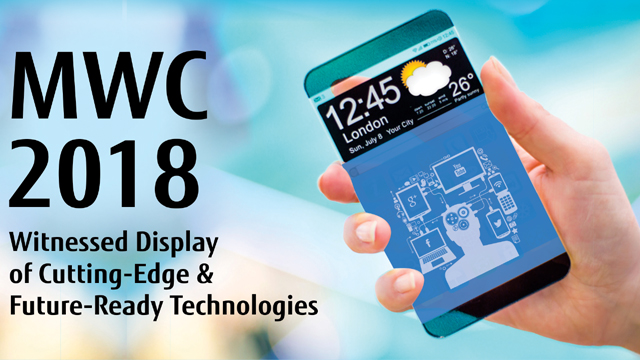 The World Mobile Congress has put the mobile phones and connected technologies of the beginning of the year in the spotlight. This year XXL screens, folding or without edge are generalized. Six models have mainly caught our attention.

2018 will be marked by the generalization of 18: 9e screens without edge, including for entry-level mobiles, while waiting for the first foldable screens.

More than 2,400 companies showcased cutting-edge products and services across 120,000 net square metres of exhibition and hospitality space at Fira Gran Via, including the new South Village, compared with more than 2,300 in 2017.

MWC Conference: 5G, Artificial Intelligence, IoT and Beyond
Over four days, the Mobile World Congress conference programme delved into topics such as 5G, artificial intelligence, the Internet of Things (IoT), content and media, drones, blockchain, policy and regulation, and many others. The keynote sessions featured leaders from established players and industry upstarts, as well government agencies and the development community.

Ministerial Programme: Platform for Critical Policy Dialogue
An integral element of Mobile World Congress, the Ministerial Programme offers a unique forum for inisters, regulators, international organisations and CEOs from around the world to discuss key developments and policy trends in the mobile sector. This year’s programme highlighted topics including the evolution to 5G and the increasing need for spectrum; privacy and cross-border data flows; sustainability and mobile for social good; and mobile in education and healthcare, among others. The 2018 Ministerial Programme hosted delegations from 181 countries and international organisations, including 71 ministers and 85 regulatory authority heads, with total attendance exceeding 2,000 delegates.

The biggest names in mobile devices are in Barcelona for Mobile World Congress (MWC) 2018, and the resurgent Nokia has just unveiled five new devices for 2018 – three mainstream Android handsets, one budget Android Go phone, and another rebooted classic from Nokia’s past. 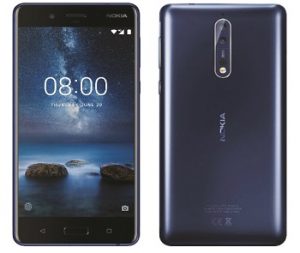 Nokia 8 Sirocco, an upgraded version of the flagship we saw last year. Milled from a single block of stainless steel and with rounded glass edges, the new top-end Nokia phone combines eye-catching looks with a 5.5-inch OLED display packing in 2560 x 1440 pixels.

Nokia had plenty more up its sleeve, including a new version of the Nokia 6, now available globally and bringing a few upgrades to last year’s handset. It offers a 5.5-inch, 1920 x 1080 pixel display, and is powered by a Snapdragon 630 chipset, with a 16MP camera around the back.There’s a choice of 3 GB or 4 GB of RAM, and 32 GB or 64 GB of storage, and again Android 8.0 Oreo is on board.

Also new at the show was a Nokia 7 Plus, with a “flagship imaging experience” and the same dual-lens rear camera setup as the Nokia 8 Sirocco. The 6-inch, 2160 x 1080 pixel display is stretched to an 18:9 aspect ratio, so this would suit someone looking for a lot of screen for not much money Besides that camera, there’s a Snapdragon 660 CPU inside, 4 GB of RAM, and 64 GB of internal storage. Like the Nokia 6, the Nokia 7 Plus is made from a solid block of aluminum, and like the other phones, it’ll be widely available from April this year.

Nokia is also bringing back another of its classic handsets, after reviving the Nokia 3310 last year. This time around it’s the Nokia 8110 that’s getting a modern day 4G update, offering users a cheap feature phone with excellent battery life and some classic Nokia apps

Sony in turn puts on the screen formats 18: 9th – become the general trend of the market – with its new Xperia XZ2 and XZ2 Compact . Two models that also have a new design, less angular, for the mobile range of the Japanese firm. Both were designed around entertainment, with 5.7-inch and 5-inch screens respectively, and sound equipment associated with vibrations for better immersion, especially for nomadic gamers.Above all, the XZ2 is the world’s first mobile camera capable of shooting in 4K HDR for better fidelity in color rendering.

The only truly original model on the show with its dual screen, the Axon M Chinese manufacturer ZTE offers a screen of 5.2 inches on each of its faces. Once unfolded, this smartphone doubles its display area. It is thus possible to watch a video on one and answer his emails on the other, for example. It remains to be seen whether it will be robust enough for intensive use. Note that this terminal is unlikely to be launched in Europe.

Avenir Telecom, in collaboration with Energizer

Convencions Internacional de Barcelona. Beautifully designed both inside and out, the new notebook and tablet excel at work, at home or on the go for the ultimate mobile computing experience.  Both the HUAWEI MateBook X Pro and HUAWEI MediaPad M5 blend crisp and clear displays, powerful hardware updates and intelligent software advances: 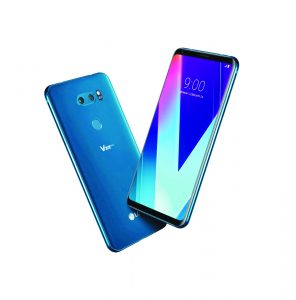 LG Electronics (LG) is debuting its first ThinQ mobile device this week at Mobile World Congress (MWC) 2018 in Barcelona, Spain. Building on the foundation of the LG V30 platform, the LG V30S ThinQ integrates new AI technologies into the most commonly used features that are closely aligned to the needs and usage behavior of consumers today. ThinQ was introduced at CES 2018 to identify all of LG’s home appliances, consumer electronics and services that utilize artificial intelligence. With the vision of becoming a human-centered AI company that puts consumers first, LG’s vision for ThinQ is to promote artificial intelligence as an approachable and less intimidating technology. LG began working on making differentiated and intuitive AI-based solutions for the most commonly used smartphones features more than a year ago. With a particular focus on the camera and voice recognition, the resulting Vision AI delivers a smarter camera that is even easier to use, while Voice AI enhances the breadth of spoken commands in the latest smartphone. 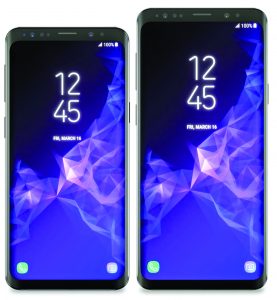 Samsung introduces the  Galaxy S9 and S9+, the smartphones that reimagine the way people communicate, share and experience the world. Made for an age in which consumers increasingly communicate and express themselves more with images, videos and emojis, the Galaxy S9 and S9+ drive innovation with Samsung’s advanced camera. Redesigned with a new Dual Aperture lens that powers an innovative low light camera, Super Slow-mo video capabilities and personalized AR Emoji, the Galaxy S9 and S9+ ensure users do not miss a moment and make their everyday epic.

The Galaxy S9 and S9 Plus were spotted in online renders in a new hue: lilac purple.Say hallo to lilac,  last year while pastels were the wash of choice across fashion shows, the lilac hue was one that stood out above the rest. According to many fashion experts lavender has a more modern, sophisticated feel. The rise in popularity of shades of purple was forecasted by WGSN last year, There’s always at least one color option that Samsung releases that stands out the most and this year it’s Lilac Purple. If you want a phone that’s vibrant, eye-catching, and flashy, this is the color for you.

Coolpad partners with Qualcomm to foray into Smart wearable gadgets 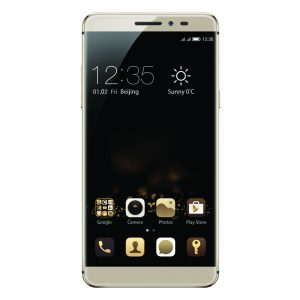 Coolpad Group, a leading global smartphone technology brand announced that it is expanding its product portfolio and foraying into Smart Wearable Gadgets. Coolpad`s Smart Wearable Gadgets product portfolio will be based on the Qualcomm Snapdragon Wear platforms. The announcement was made at the ongoing Mobile World Congress 2018 in Barcelona, Spain.

This portfolio is focused on products that are tailored to meet the specific power, connectivity and location requirements of emerging wearable sub-segments, including smartwatches for kids, and smart trackers for pets, the elderly, and valuable assets.

Coolpad is utilizing the Snapdragon Wear 2100 and 1100 platforms in its range of products. The Snapdragon Wear 2100 platform is built to meet the needs of the emerging 4G kid watch segment. It is engineered to support 4G multi-mode with bi-directional calling and delivers indoor and outdoor positioning through a combination of Wi-Fi®, GPS and 4G location triangulation techniques. The platform also features Qualcomm® Processor Security, which is the hardware and software security foundation for billions of IoT devices deployed around the world. 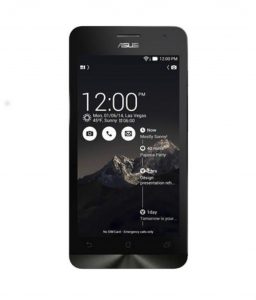 The revolutionary ZenFone 5 delivers the ultimate smartphone performance at a groundbreaking price.

Equipped with the latest Qualcomm ® Snapdragon ™ 636 Mobile Platform with its smooth, responsive, power-efficient performance, ZenFone 5 includes a full suite of AI-enhanced features powered by the Qualcomm Artificial Intelligence Engine (AIE). ZenFone 5 comes with up to 6GB RAM and 64GB ROM for amazing performance. ZenFone 5 has an intelligent dual-camera system that adapts and learns, delivering perfect photos every time. With its latest flagship Sony ® IMX363 sensor, a 120° wide-angle secondary camera and AI-enhanced camera features — including Auto Scene Detection, real-time portrait effects, AI Photo Learning and real-time beautification — ZenFone 5 encourages creativity and frees the user to concentrate on the subject rather than the camera.

Crafted to perfection with premium materials, ZenFone 5 has a strikingly beautiful ultra-slim bezel, all-screen design, featuring a stunning 6.2-inch display with a 90% screen-to- body ratio in an all-metal, glass-covered body that&#39;s as small and compact as most standard 5.5-inch phones.