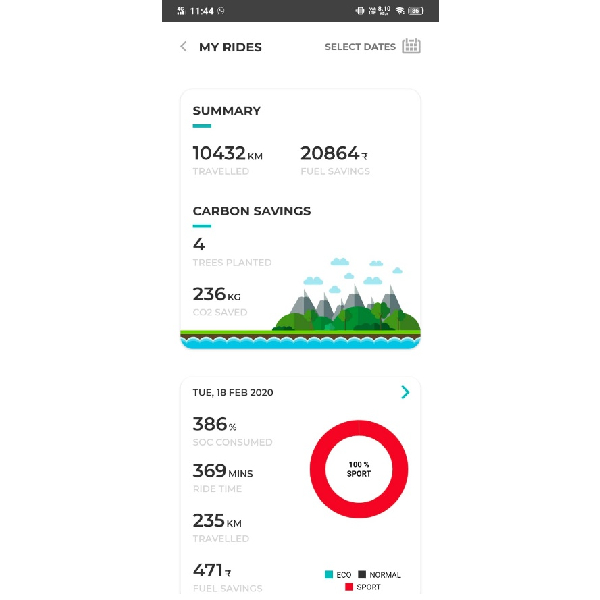 Revolt Motors, India’s next gen-mobility company has added a first-of-its kind update to its ‘My Rides’ option in MyRevolt app. The functionality of My Rides tab has been enhanced with this new update which allows users to track their contribution towards protecting the environment by highlighting the total fuel and carbon emissions saved during their ride on their favorite Revolt motorcycle.

The application not only helps users view the overall summary of the ride with total distance travelled but also provides data on the fuel cost and CO2 emissions saved during their ride. The update shows the no. of reduced KGs of CO2 emissions as compared to the same number of KMs done on ICE motorcycles. The update also lets users evaluate the no. of trees planted through the carbon savings.

With a mission to create future of next-gen mobility with 100% accessibility and 0% fuel residue, this feature will help in increasing the adoption towards eco-friendly transportation across the country #RIDETHECHANGE. Users can easily check the status of their ride with few steps:

Revolt has been working aggressively towards expanding the retail presence across cities in order to fulfil consumer demand. The company has plans to expand its sales network and strengthen retail presence further by entering 50+ new cities in India including Chandigarh, Lucknow & NCR by early 2022. Earlier this month, Revolt Motors opened its first retail stores in both Kolkata and Madurai. Customers who have been eagerly waiting can now book their very own Revolt motorcycle through the company.

Revolt Motors has witnessed a phenomenal response from buyers for its flagship RV400 which was sold out within minutes of going on sale every time. In addition to this, the company is also leveraging AI, to upscale and provide an in-house developed contactless experience for its customers.

The RV400 comes with a 3KW (Mid Drive) motor, powered by a 72V, 3.24KWh Lithium-Ion battery that can churn out a top speed of 85km/h. The bike can be operated through the MyRevolt App, which offers connectivity features such as bike locator/Geo fencing, customised sounds that you can change with just a tap on the screen, complete bike diagnostics, battery status, historical data on your rides and KMs done, and also the option of locating the nearest Revolt Switch Station to swap your Revolt’s battery at and be on-the-move in less than 60 seconds.

RV400 features three riding modes – Eco, Normal and Sport – each suiting to the riding style and needs of the driver. Also, comes with Upside Down (USD) forks up-front and a fully adjustable mono shock at the rear to give an unparalleled riding experience.