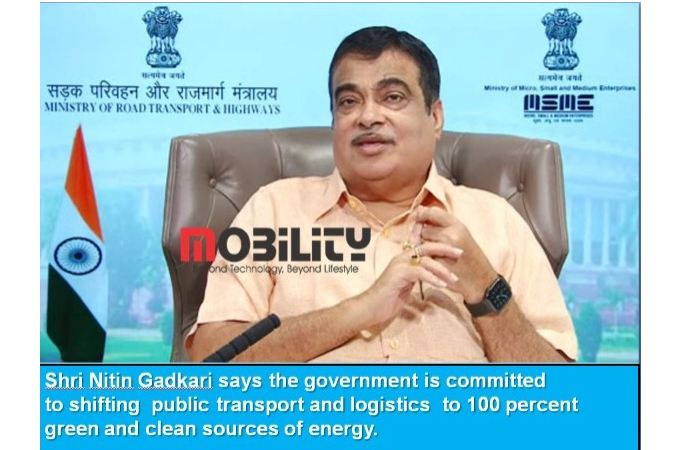 Union Minister for Road Transport and Highways Shri Nitin Gadkari said the government is committed to shifting public transport and logistics to 100% green and clean sources of energy. Addressing the Symposium on International Automotive Technology he said the national hydrogen mission launched by the Prime Minister seeks to develop hydrogen technologies for the benefit of the mobility sector and make India the leader in the production and usage of green hydrogen. The Minister said

Shri Gadkari said this year is special as it marks the beginning of celebrations of 75 years of Independence of India. He said we are marching with our vision led by Prime Minister Shri Modi Ji with a focus on becoming AtmaNirbhar across all sectors. He said our automobile sector is the pride of India and he was sure that it will take India’s manufacturing towards new heights, matching and even better than International standards

The Minister said the recently launched Production Linked Incentive scheme aims to boost ‘Advanced automotive technology products’ in the Indian auto sector which helps to lower fossil fuel emissions.  Shri Gadkari said the government expects the scheme would lead to a fresh investment of more than Rs. 42,500 crore and creation of additional 7.5 lakh jobs in the sector.

He said as far as public transportation is concerned, the need of the hour is to develop import substitute, cost-effective, pollution-free, and indigenous mobility solutions for India and dependence on imported crude oil needs to be reduced.

Shri Gadkari said we are also planning to introduce flex-fuel vehicles which allow operation of the vehicles on 100% ethanol and petrol. He said Flex engine-based vehicles are already running in the USA, Brazil, and Canada. He said technology is readily available, and it is just a matter of time to take that leap that will transform the transport landscape of India forever.

The Minister said safety scenario on Indian roads needs improvement as every year approx. 1.5 lakh people die on Indian roads in almost 5 lakh accidents. He said the concept of Zero Vision, which is achieving zero accidents and zero loss of life is being adapted in India similar to European countries.