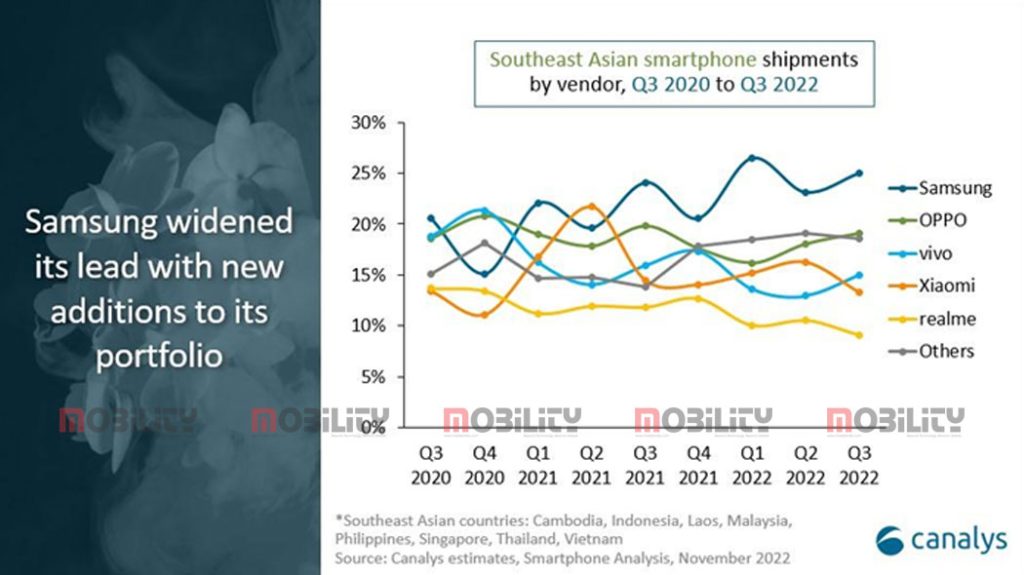 “Post-pandemic inflation is likely to linger for the rest of 2022,” said Canalys Research Analyst Chiew Le Xuan. “Global macroeconomic headwinds pose a significant risk to Southeast Asian countries, negatively affecting consumers’ confidence and smartphone vendors’ operating costs. Furthermore, inventory, inflation and interest rate hikes have led to smartphone spending returning to the ultra-low end.” Smartphone vendors launched various new low-end products in Q3, a defensive strategy to protect their shares as the market suffers from demand headwinds. OPPO has remained consistent in its strategy of moving away from the ultra-low end, focusing its investments on growing channel confidence and upgrading its brand. In the premium sector, Samsung used its extensive resources in above-the-line marketing and bespoke pop-ups to market its new foldable line-up and effectively maneuver as the retail channel returned to pre-pandemic levels. Apple’s iPhone 14 launch in Singapore and Thailand, with solid demand for its Pro series, reiterates that the high-end segment remains unimpeded by inflation.

“Despite short-term macroeconomic headwinds and consumers’ price sensitivity, Southeast Asia remains a bright investment spot and is increasingly strategic to vendors such as Apple and Samsung. In the short term, eyes are on the region’s capability to navigate macroeconomic challenges and maintain the stability of its financial systems and its ability to control political and economic risks. Southeast Asia has remained steadfast and has proven its ability to control currency and inflation risks relative to other developing regions. Market leaders will look to leverage the region’s geopolitical advantage in production and trading while building relationships with local governments and telcos to secure opportunities in digital transformation. As a result, they create a strategic growth path to reach new consumers and build on brand trust. Smartphone vendors will see a return on their investments in the long term, capitalizing on the trend of investors and tech supply chains diversifying out of mainland China.”