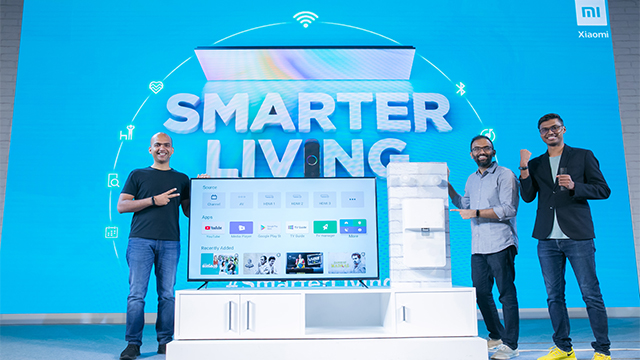 Xiaomi announced a new range of smart TVs along with a wide range of smart home products at the Smarter Living 2020 launch. The Mi TV 4X (65) is the flagbearer of the new Mi TV 4X series, with a large 163.9cm HDR LED display with Xiaomi’s in-house VPE (Vivid Picture Engine), and more.

The Mi TV 4X series has been announced with an aim to bring 4K for everyone; it comprises of its flagship Mi TV 4X (65) along with Mi TV 4X (50), Mi TV 4X (43). These new Mi TVs come with a redesigned version of PatchWall based on Android 9 Pie, and have Netflix and Amazon Prime integrated out of the box. The series is also the first in the world to come with Google’s Data Saver Mode.

Raghu Reddy, Head – Category and Online sales, Xiaomi India said, “At Xiaomi, we aspire to be one of the coolest technology companies and being the world’s largest hardware incubator helps us create new-age products that are aware, connected and bring convenience to everyday life. We are not just a smartphone company, and our wide offerings across categories in India is testament to that. Xiaomi India has been the #1 fitness wearable, and smart TV brand in India for several consecutive quarters and we hope the next set of products launched today help us further propel our growth.”

Mi TV 4X (65) with a 163.9cm LED display is the first-ever TV to come with Xiaomi’s in-house Vivid Picture Engine. It features a 4K 10-bit HDR display with an all-new full-metal design with thin bezels complementing the ultra-bright display. With a wide color gamut, it brings RealityFlow which is enabled by a dedicated MEMC chip onboard. The picture quality is complemented by 20W stereo speakers with support for Dolby Audio and DTS-HD, delivering a cinematic experience with multi-channel audio.

Mi TV 4X (50) and Mi TV 4X (43) also sport 4K 10-bit HDR displays, coupled with the same 20W stereo speakers with support for DTS-HD. The Mi TV 4X series features VPE calibration, Xiaomi’s in-house image processing technology which brings deeper contrasts and punchier colors resulting in a true-to-life experience. VPE will soon also be rolled out to the other Mi TV series. Besides, announced alongside the 4K Mi TV 4X series was Mi TV 4A (40), a new screen size that adds to the portfolio, with a full HD screen.

The new generation of Mi TVs are powered by a new and refined version of PatchWall based on Android 9 Pie, designed specifically for the Indian market while retaining support for Google Assistant thus enabling universal voice search. As a part of the promise of bringing in new content partners, Xiaomi’s new Mi TVs now support Netflix and Amazon Prime out of the box. PatchWall now provides a large selection of latest content: 700,000+ hours of digital and 4K content across 18 different content partners.

The new generation of Mi TVs are the first TVs in the world to bring Google’s Data Saver, designed with inputs from Xiaomi, for the first time to Android TV. Data Saver allows upto three times more content streaming, data counter for individual apps, and the ability to cast locally and wirelessly to the TV without the need for an internet connection.

The 0.95” color AMOLED display is now capable of not just displaying notifications but also enables music control, with unlimited customizable watch faces on Mi Smart Band 4. Apart from tracking activities like running, Mi Smart Band 4 can now track swimming with automatic stroke recognition and promises a battery life of up to 20 days. The sleek and minimalist design, which has been the core of the Mi Band series continues with the Mi Smart Band 4. Existing Mi Band 3 straps can be used with it, increasing its versatility.