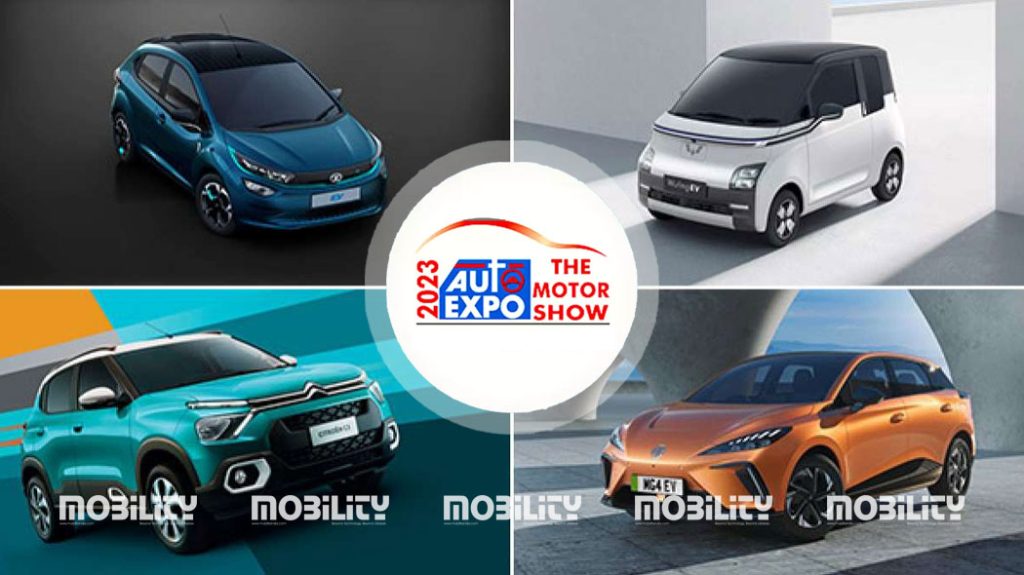 Auto Expo is one of the world’s premier auto shows and a signature event that witnesses the best minds coming together on a single platform to showcase all that is best in the automotive world, in terms of products, technologies, concepts and trends.

Held at India Expo Mart in the Knowledge Park, Greater Noida, Uttar Pradesh, the Auto Expo 2023 has brought a host of new cars, motorcycles, and scooters to the Indian market. Major car brands like Maruti Suzuki, Hyundai, MG, Kia, BYD, Toyota, Lexus, and Tata Motors are participating in the Auto Expo this year. However, some key players like BMW, Skoda, Volkswagen, Audi, Mercedes-Benz and more have decided to keep a distance from the show.

“India is the fastest-growing economy in the world and we can name the automobile industry the growth engine for it. The auto industry will play a prominent role in the process of realizing Prime Minister Shri Narendra Modi’s dream of Atmanirbhar Bharat,” says Gadkari at the Auto Expo 2023.

Hinduja Group’s SWITCH also displayed India’s first electric double-decker bus, the open-topvariant of SWITCH EiV 22, which boasts wide front and back doors, two staircases, and an emergency door that complies with the latest recent safety regulations. The electric bus comes equipped with a brand-new generation of modular batteries with advanced NMC chemistry that was specially developed for the Indian market and climate, the company said. According to the company, 65 passengers may be accommodated in the electric bus. A 231 kWh capacity, 2-string, liquid-cooled, higher density NMC chemistry battery pack with a twin gun charging system drives the SWITCH EiV 22.

Maruti Suzuki India unveiled two new products — Jimny and Fronx — in the country. The country’s largest carmaker also seeks to regain 50 per cent market share in the domestic passenger vehicle segment by bolstering its presence in the sports utility vehicle (SUV) space. Unveiling the products at the Auto Expo 2023, Maruti Suzuki India MD and CEO Hisashi Takeuchi said the company’s medium-term goal has been to get back 50 per cent market share and secure the number one position in the SUV segment.

Tata Motors has showcased its Tata Altroz Racer, an iteration of a sporty hatchback at the Auto Expo 2023. The Altroz Racer gets cosmetic as well as feature upgrades which include styling changes and a new infotainment system. This hatchback is said to rival Hyundai i20N Line if launched in the country here. The Tata Altroz Racer comes in a red and black dual-tone paint scheme. Its bonnet, ORVMs and roof are blacked out with white stripes which run in between and reminds of the new Tata logo showcased on the Avinya concept. The alloy wheels on the hatchback get the gloss black finish to further improve the looks. In addition to the aforementioned products, the company’s focus on sustainable greener mobility solutions can be ascertained by these products. The electrified products include strong hybrid, plug-in hybrid, fuel cell electric vehicles, flex-fuel hybrid vehicles and pure EVs based on hydrogen technology. To manifest these technologies, there are cars like the Corolla Cross H2 hydrogen concept vehicle.

Tork has also showcased its latest electric motorbike Kratos X. It will be based on the Kratos R. It will sport a new aluminium swing arm and a seven-inch touchscreen supported by Android. It will offer fast charging facility. Test rides for customers are likely to commence in March and April 2023, while the deliveries of this bike will begin in June.

MG owned by the Chinese auto giant SAIC Motor has unveiled its internationally acclaimed all-electric hatchback the MG4 at the 2023 Auto Expo. The company took the sheets off the EV hatchback along with its subcompact Plug-in Hybrid eHS at its booth at the event. The MG4 competes in the C-segment in European markets and comes available in three iterations – Standard, Comfort, and Luxury. Both of these innovative models have been showcased at the show as the brand’s commitment towards the future of green mobility in the country. The MG4 would be the company’s second mass-market electric vehicle if it were to be introduced in India. The SAIC Motor Design Center in Shanghai, in collaboration with the Advanced Design Studio in London and the Royal College of Art, which is also based in the British capital, developed the EV hatchback’s dynamic design as a worldwide vehicle. The MG4 EV hatch measures in at 1,504 mm in height, 1,836 mm in width, and 4,287 mm in length. Additionally, it has a 2,705 mm wheelbase, which gives it pleasing proportions and a large cabin. The capacity of the luggage compartment has been reported to be around 350 to 1,165 liters. Depending on the model version, the drag coefficient is between cW 0.27 and 0.287. Starting from the front the MG4 EV comes equipped with a set of striking headlamps and tilted upright indicators along with six vertical LED fiber optic stripes that are placed in an ascending order. Three units for fog lamps and low beams are combined with LED turning lights. The hatchback also gets an aggressive front fascia with a sharp nose and extended front splitter in black. The lower part of the bumper also houses vertical slats. Furthermore, there are two wide openings at the front which are accentuated by black highlights. The MG4 also gets a two-tone roof. Internationally, the MG4 Electric comes in 7 body colors: Pebble Black, Dover White, Medal Silver, Andes Grey, Diamond Red, Brighton Blue and Fizzy Orange.

VE Commercial Vehicles (VECV) unveiled a range of vehicles, including an intercity bus that can travel up to 500 kilometres with a mix of depot and 30-40 minutes opportunity charging during a journey. VECV, a joint venture of Volvo Group and Eicher Motors, unveiled 13.5 meters long electric intercity coach, Eicher Pro 2049 electric 4.9 T GVW Truck, which it claims to be the longest EV in the segment.

SUN Mobility launched two electric mobility solutions – SwapX, a compact station for EV Revolution and S2.1, a next-gen battery pack at the show. Sun Mobility, an energy infrastructure and services provider for electric mobility, on Thursday said it aims to serve 10 lakh vehicles through its platform by 2025. The company unveiled its SwapX compact battery swapping station at the Auto Expo 2023 here, with an aim to enable individuals to become franchisees as it looks to accelerate expansion of network. Besides, Sun Mobility also showcased its next generation battery pack S2.1, which has a higher power battery offering 45 per cent more range and interoperability. The company, which offers battery swapping service to two- and three-wheelers and small four-wheelers, has already deployed over 240 stations in more than 18 cities in India.

At Auto Expo, mobility is no longer just about cars. Since AI, Analytics and Robotics are increasingly playing a vital role in the field of mobility, be it through shared rides, driving pleasure, voice commands or even assisted vehicles in the future, all of it is on display. Giving visitors a peek into the future.