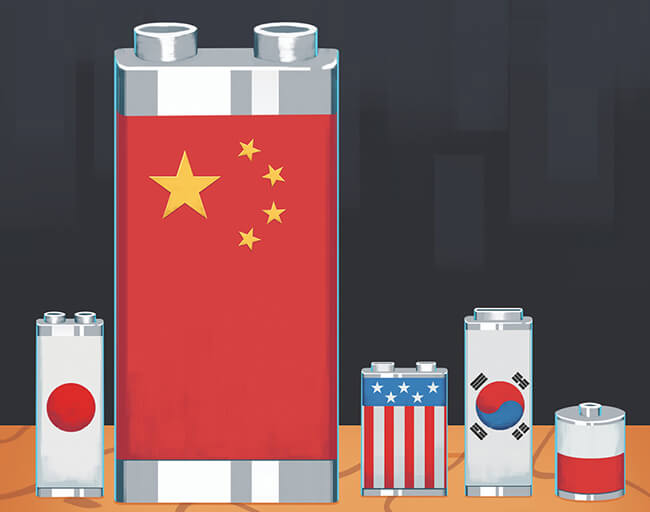 China continues to dominate the global lithium battery supply chain, but the US could slowly develop into its competitor in the coming years, according to industry observers.

With the rapid development of electric vehicles (EV) and energy storage technologies, lithium batteries have attracted significant attention. Among countries around the world, China has had the most involvement in the lithium battery industry, with over 90% of the world’s lithium iron phosphate (LFP) batteries being manufactured there. Tesla’s use of LFP batteries in China for the first time is also inspiring global carmakers to follow suit.

Although the US could potentially become a competitor to China in the lithium battery market in the future, there is currently still a wide gap in production capacity between the two countries.

Lithium batteries likely to remain in short supply in 2022

At present, LFP batteries and ternary batteries are the two mainstream battery technology routes in EVs and energy storage systems. Chinese battery suppliers, led by CATL and BYD, hold over 90% of the LFP battery market, while the ternary battery market share is divided among South Korea’s LG Energy Solution, SK On, and Samsung SDI, Japan’s Panasonic, and China’s CATL.

Due to stability issues with ternary batteries, more companies turned their focus to LFP batteries in 2021. After adopting LFP batteries for all of its standard-range Model Y and Model 3 cars, Tesla is planning to equip two-thirds of its future vehicles with the same type of batteries. LFP batteries are also becoming more commonly used in battery cells for large-scale energy storage in 2021, thanks to stable supplies from CATL.

To prevent China’s continued dominance in the LFP battery market, South Korea’s LG Energy Solution, and SK On have announced recently that they will begin developing LFP batteries. In response, Chinese LFP battery makers are actively expanding their production.

Since production expansion for lithium batteries is very time-consuming, they will most likely continue to be in short supply in 2022. Some market observers have even warned that the shortage of lithium batteries will be more severe than that of automotive ICs.

Automakers could reduce dependence on CATL in the future

An article titled “CATL: multi-billion battery empire facing potential challenges” surfaced on the Internet in China in late 2021, pointing out that CATL could begin to receive fewer orders as many automakers are trying not to rely on one sole supplier. It said many carmakers in the US, Europe, and China have begun seeking collaborations with different lithium battery suppliers.

Industry observers believe that global automakers will continue to adopt risk diversification strategies and partner up with multiple battery suppliers after 2023.

An article titled “Why a Chinese Company Dominates Electric Car Batteries” by The New York Times examined the rise of CATL in the global battery supply chain.

The article said both Tesla and CATL were the biggest winners in the new energy vehicle market in 2021, while partially attributing CATL’s success to support and lavish subsidies from the Chinese government.

The article also mentioned CATL’s advantages in securing lithium and cobalt as the company had secured mineral resources in China and acquired one-fourth of the Kisanfu copper-cobalt mine in Democratic Republic of Congo by spending US$137.5 million in 2021. It also noted that CATL had received US$33 million from the government of Qinghai province between 2015-2017 though the latter had declined to comment on related reports. The article suggested that Chinese government’s support for CATL is part of the “Made in China 2025” national strategic plan.

Meanwhile, industry analysts pointed out that China’s production capacity of power batteries is 14 times that of the US. Even if the US speeds up its development in the area, it will not be able to catch up with China in a short period of time, they explained.

As a result, the US is extremely concerned about China dominating the battery supply chain and potentially controlling the development of the US automotive industry in the 21st century, the analysts said.

Sources from the supply chain also noted that the US has treated semiconductors as strategic resources since 2021 and that it might take the same approach to lithium batteries in 2022. They added that China-based Gotion High-Tech is planning to build lithium battery factories in the US, with Tesla, Ford, GM, and Volkswagen being its potential clients.

As more global carmakers are introducing EV models at more affordable prices, there is no longer a big difference in manufacturing costs between EVs and fossil-fueled vehicles. Without lithium battery self-sufficiency, the US could face major challenges in its EV development. (With inputs from Digi times)