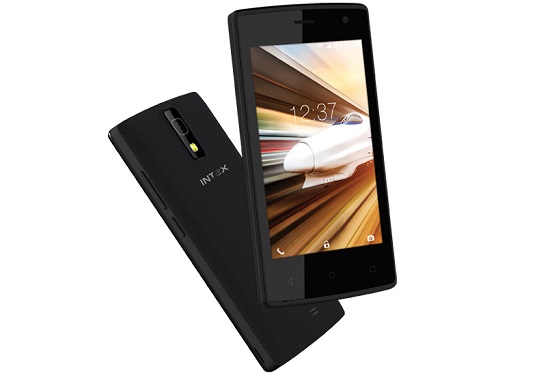 Amidst the ongoing last IPL Season, Intex Technologies, one of the leading mobile handset players and owner of Gujarat Lions IPL team, announced a big surprise for its consumers with the launch of the lowest priced Android 7 powered smartphone in the market – Intex Aqua A4, priced at INR 4,199. The event witnessed the presence of prominent Gujarat Lions players who added limelight to the launch.

The 4G-VoLTE Aqua A4 smartphone sports a 4-inch WVGA (480 x 800 pixels) display, that offers sharp and vivid images and videos. Powered with a 1.3GHz quad-core processor and 1 GB RAM the device ensures smooth performance, multi-tasking and boasts of the latest Android Nougat 7.0 OS. The smartphone, weighing just 147gms, sports a sleek look and design giving the handset an elegant feel.

Nougat introduces notable changes to the operating system and its development platform, including the ability to display multiple apps on-screen at once in a split-screen view, support for inline replies to notifications, and an expanded “Doze” power-saving mode that restricts device functionality once the screen has been off for a period of time.

Apart from the impressive specifications, the device comes loaded with innovative VAS services for the users. One major feature is the QR Code reader where users can either select the QR Code mode from the camera or open the QR Code and point the QR Code to the center of the screen. The QR codescanner decodes the QR code automatically and shows the relevant information with buttons for next reactive steps. Another one is Xender that enablesusers to share any type of files with friends at any time and any place without using mobile data. It is 200 times faster than Bluetooth transfer speed and it can also play music and video files. Aqua A4 also comes with the popular music streaming app Gaana and News Point, providing all relevant news in a crisp, clean and personalized format.

Commenting on the launch of the lowest priced Android 7 smartphone, Aqua A4, Ms. Nidhi Markanday, Director & Business Head, Intex Technologies said, “With the launch of Aqua A4, powered with the latest Android at the lowest price, Intex has again brought tech innovative product at the most affordable price in the market for all. Gujarat Lions players graced the occasion with their presence and reiterated our connect with the youth. We are sure that Aqua A4 with high specs like Android 7.0, classy looks and high performance at the lowest price will delight our customers.”

For selfie lovers and amateur photographers, Aqua A4 offers a powerful 5MP rear camera to capture vivid images effortlessly and a 2MP front camera to click selfies with various modes. The 4G-VoLTE smartphone has an in-built 8GB ROM with an expandable memory of up to 64GB. The device is powered by a 1750 mAh battery which allows users to talk for long hours up to 6 hours with a standby time up of 250 hours. Along with 8 GB of ROM the device offers users 64GB of expandable memory.