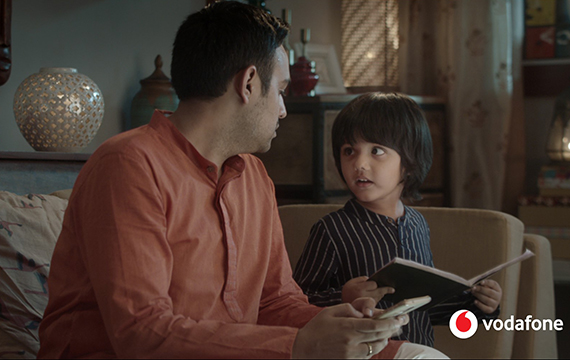 Vodafone has launched a heart-warming video under its successful #LookUp campaign, urging viewers to celebrate Diwali with each other rather than with devices – Kyunki apno se acha koi network nahi, apnepan se acha koi connection nahi. The film beautifully brings out the changing nature of Diwali celebrations seen through the eyes of a kid. It shows the contrast between how Diwali was celebrated traditionally by the child’s father with lots of love & warmth and how it is perhaps celebrated presently. With its stark difference, the film shows how technology sometimes takes over and people lose out on the connections that really matter.

Siddharth Banerjee, EVP – Marketing, Vodafone India said, “In the hyper-connected world, Vodafone again reiterates the need for real conversations, especially on occasions and festivals. Our #LookUp campaign has resonated well with our audience- generating online and offline talkability and driving up brand preference for Vodafone. Hence, after delighting our audiences on Valentine’s Day / Father’s Day and Friendship Day with #LookUp messages, this time around, we are extending our #LookUp philosophy to Diwali encouraging viewers to celebrate with family and friends – in essence, the connections that really matter.”

Kiran Antony, Executive Creative Director, Ogilvy said, “Last year, Vodafone started the #Lookup campaign to encourage people to have real conversations on special occasions with people that matter. In this film we see a modern family through the eyes of a child who while excited to read his dad’s essay on Diwali, sees the family around him in complete contrast. Our endeavor is to remind people that while phones do play an integral part in our daily lives, it is perfectly fine to put them aside during those special occasions & celebrate with your loved ones.”